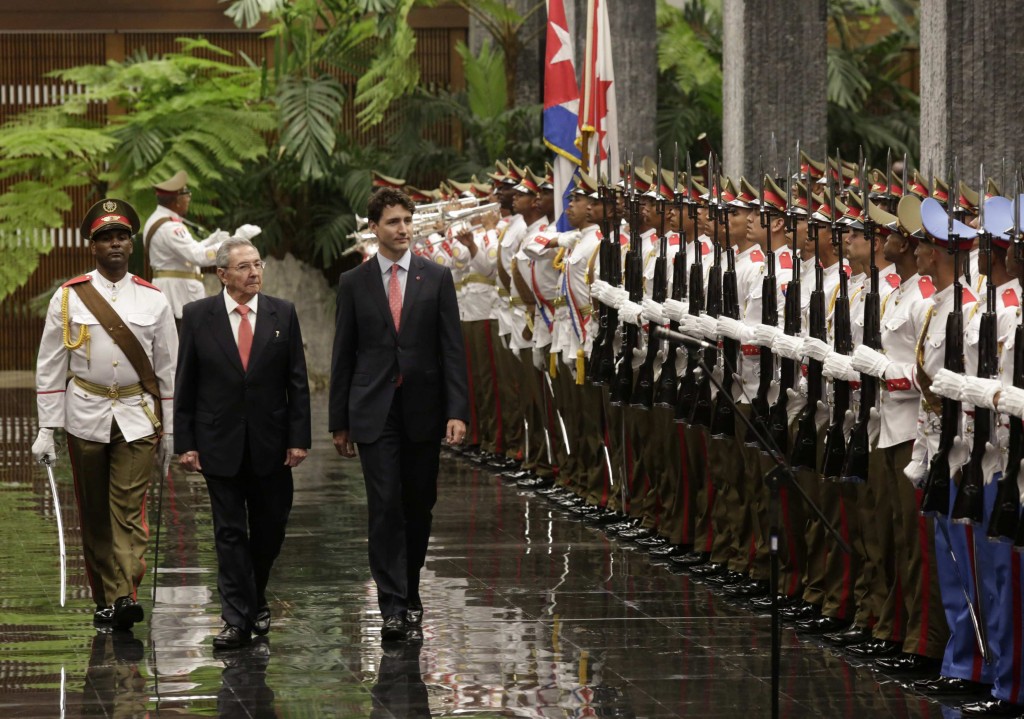 HAVANA,Nov. 16th  – Prime Minister Justin Trudeau arrived in Cuba on Tuesday evening, where the country’s president told him the island nation will not progress any faster than it already is.

Cuban President Raul Castro, the younger brother of legendary Cuban leader Fidel Castro, warned that others have gone through reforms too quickly without regard to the needs of the people, leaving their citizens jobless.

“Even though I have said we have to move slowly, you can go too fast. I have said slowly, but steady,” Raul Castro said through an interpreter.

The message to the Canadian prime minister in a grand room in the Revolutionary Palace in Havana came as Trudeau tries to open up trade opportunities for Canadian companies who want to cash in on the Cuban government’s decision to loosen restrictions on foreign investment.

And to the north is the shadow of U.S. president-elect Donald Trump and his tough talk about rolling back a thawing of relations between the United States and Cuba that has sent a Cold War chill through the island.

Touting Canada, Trudeau said Canadians can be pleased that they have played a positive role in Cuba through the years.

Trudeau tried to strike a more personal note just before media were ushered out of the room where the meeting took place.

The official meeting came hours after Trudeau landed in Havana, the first visit by a Canadian prime minister in two decades.

On Wednesday, state diplomacy turns to soft diplomacy when Trudeau meets with students at the University of Havana.

“It’s in the people-to-people world … where Canadian-Cuban relationships are the most significant,” said Karen Dubinsky, who teaches in a joint Queen’s University-University of Havana course that brings Cuban students to Canada and sends Canadian students to Cuba.

“Cuba is good at that, at using soft diplomacy, and I think what I’ve learned from our experiences working with Cuba is they only want to do more of that.”

Cuban graduate student Freddy Monasterio, who studies Canadian-Cuban relations, said the excitement of the December 2014 announcement of renewed ties with the United States has started to fade. The prime minister’s visit could make Canada an alternative for Cubans leery about the style of capitalism the United States wants to export, he says.

“Usually when people talk about different ways for Cuba to get out of a crisis and open up a little bit, people immediately associate the U.S. as the logical, and only alternative,” Monasterio says. “We want to show that there are other alternatives and Canada for me is one of them.”

Cuba’s national statistics office reported last month that of the 2.1 million tourists during the first half of the year, more than 777,000 – just over a third – were from Canada. That put Canada at the top of the visitors’ list, with the United States sitting in third with 187,073 travellers.

The Terry Fox Run in Cuba is the largest held outside of Canada.
http://www.macleans.ca/news/canada/trudeau-meets-castro-havana/