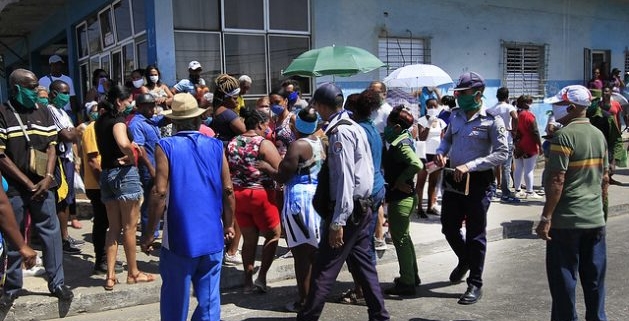 HAVANA , May 12th (IPS-Cuba)  Shortages of food and other essential items are conspiring against the public health system’s efforts to fight COVID-19, as thousands of people are forced to wait in line for hours in front of retail stores.

It’s a cause for concern for the government, which is considering different ways to sell and distribute goods, and trying to give some order to never-ending lines of customers by enforcing measures, directly asking people to wear masks and to comply with physical distancing guidelines, and even giving a green light to police control.

Opening up e-commerce options hasn’t managed to keep things under control and it can’t keep up with demand, whether that’s because they don’t sell everything you need or because there are delays with delivery, payments being processed without goods being delivered, and phonelines to make a complaint that aren’t always open, as well as other problems.

The Cuban people have a wide range of opinions and anecdotes about the matter. Cubans are now talking about lines and the time you spend in them almost as much as they do about baseball, the national sport or the current soap opera. As a result of imposed self-isolation at home, phones and social media have become the perfect vehicles for people to exchange complaints and suggestions for a solution.

“This Sunday, I spent almost four hours in line to buy a tiny packet of ham and a liter of cooking oil. A police officer jotted down the ID card number of those of us who arrived, and then a sales assistant handed out numbers in the order of arrival,” a customer, who asked to remain anonymous, told IPS, in Havana’s Playa municipality.

Some days before, this same person – the only person who leaves the house to do the shopping – had complained about the commotion and lack of control in a line he stood in to buy chicken. “I have seen people who aren’t from the neighborhood come and line up more than once. They use their cellphones to find out what’s being sold and where. That’s why products run out so fast,” she said.

“I stood in four lines to buy detergent and it ran out before it was my turn to buy. I managed to get a hold of it the fifth time. They should include it in the rations booklet, even if I could only get it every two or three months,” Mayrelis Gonzalez said, who complained to IPS about the low perception of risk many people outside have.

The ration booklet is making a comeback as the preferred retail option for many people, because it offers certain quotas of rice, sugar, eggs, chicken and other meat, cooking oil and coffee to Cuba’s 11.2 million inhabitants. Prices are subsidized by the State.

Even though it helps to fill some of the dietary requirements of some of the poorer sectors of Cuban society, it isn’t close to enough and families need to turn to other non-subsidized markets to buy more for a much higher price. The rations booklet has existed ever since the ‘60s and there have been attempts to get rid of it or at least reduce its importance as part of Raul Castro’s reforms, but the current situation advises against this.

Documents from the UN Development Assistance Framework in Cuba consider that access to this food quota is a universal right in the country and highlight the existence of special diets for vulnerable groups, children, pregnant women and people with chronic illness.

Commerce authorities have warned that supplies available at market price won’t be enough to transfer them to the rations booklet, and to regularly provide these goods to the 3,809,000 family units registered on this system, involving over 11 million Cubans.

Likewise, the number of families that require social benefits because of low income went up from 112,000 to 606,945.

“Shortages today aren’t related in any way to the pandemic. It had been a problem for months already, the result of scarce foreign currency funds in the country, which led to a cut in imports of certain foods,” economist Omar Everleny Perez Villanueva told IPS.

COVID-19 has worsened the dire Cuban economy, due to a recession in tourism, a drop in remittances, strong tensions in the energy sector and a harsher US embargo, which the government says is the main obstacle for progress in this country.

Within this context, the Perez believes that “the measure of redistributing products in a fairer way, during this crisis, would be to organize sales with the rations booklet,” even if it were just a temporary solution, and implemented as an “emergency need for survival.”

Consulting subscribers of its website in Cuba, IPS could verify that many people were interested in the rations booklet including more products to ensure a fairer and more organized distribution of available food items, although there were also plenty of opinions against this idea.

“I believe that the infrastructure of the rations booklet would allow for greater versatility in food distribution. Not only rationed goods, but also market priced ones,” Arantxa Fernandez said, who believes it would facilitate the elderly who have reduced mobility. “If I could get hold of more things at my neighborhood bodega store, I wouldn’t leave my block,” she concluded.

However, Oniel Santana Contreras said if the rations booklet were to make a big comeback, then these crowds would just move to bodega stores and butcher’s, which have poorer storage conditions and less freezers than the retail network of CUC [hard currency] stores do.

Economist Esteban Morales warned that the “rations booklet is ineffective,” if supply falls short, like it does right now. He believes that the alternative, while shortages last, is to accept lines and keep them in order, distributing “what they can” via the rations booklet and helping the disabled.

“I believe that with the shortages the country is experiencing, the rations booklet continues to be crucial, but the concept of how it is used needs to change, allowing bodega stores, markets, to sell not only rationed goods, but also other market priced products,” sociologist Reina Fleitas pointed out.

“The State needs to find more unifying and fairer modes of distribution. I support getting rid of subsidized goods and instead subsidizing people, but I am also in favour of the bodega store selling rationed and market priced, national and imported goods,” the expert said, as she believes the rations booklets plays a more important role in an economy dependent on imports.

The rations booklet was born on March 12, 1962, to navigate shortages caused by the US embargo, the government at the time explained, as the US had been the country’s main trade partner back then.

The US, with its southern shore just 90 miles away from Cuba, cut off all relations with the Cuban Revolution that year, and established an embargo against this Caribbean island, which it still upholds and is known here as the “blockade”.

The rations booklet was also conceived because of the growth of people’s purchasing power at a higher rate than the production of consumer goods and the State’s inability to import them. Basic quotas were ensured with the ration’s booklet for the entire population, at a subsidized price, sometimes even lower than production costs.