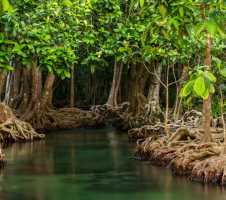 Havana, Mar 7th (PL) After four years of implementation, Cuban researchers have achieved positive results in the restoration of an ecosystem on the southern coast, an area vulnerable to climate change, said today an expert here.

The project is called ‘Manglar Vivo’ (live Mangrove), and seeks to protect this species in the southern area of the provinces of Artemisa and Mayabeque and reduce the sea surge in coastal sites, said Luis David Almeida.

Almeida, general coordinator of the project, told the Prensa Latina news agency that the projects also seeks to improve shores and that mangrove acts as protection to mitigate coastline retreat and floods due to storms.

After the presentation of the project to the delegates of the Convention of Science, Technology and Innovation, which takes place here with delegates from some 40 countries, Almeida said that protection and care of native species and swamp forests, which limit farmland, represent a natural filter to human intervention in agriculture, retain water and purify it.

In his opinion, another relevant achievement of the project is that it raises awareness in communities and local governments for the protection of these sites and provides decision makers with a methodology to repeat throughout the country, in areas with similar conditions.

The Science, Technology and Innovation Convention opened its scientific sessions today with 10 events held at the same time.

Researchers from around the World Gather in Havana
Scroll to top