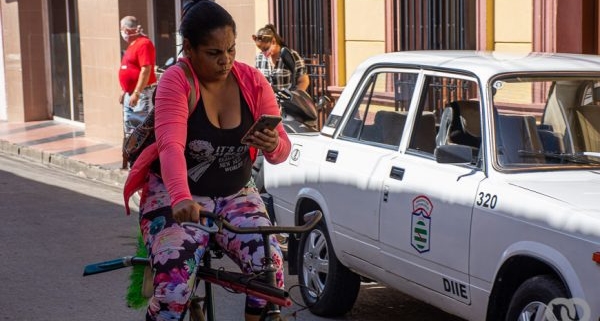 HAVANA, Aug. 17th By Alberto C. Toppin  If Dimairy Benavides Orta is asked which messaging application she uses today to chat, the answer will not be Messenger or WhatsApp, Telegram or Twitter.She will say, since 3 months ago, it’s Sijú. With the Covid-19 crisis, Dimairy found it impossible to travel from Havana to Villa Clara, where her mother and family life. Her phone is not compatible with Cuba’s telecommunications company’s 3G and 4G networks.

So, her boyfriend, Yadir, got her the Cuban version of Sijú, an email messaging application Daimairy and her relative’s use.   And that’s where voice messages and photos come and go.

“It’s quite inexpensive”, says Dimairy. “Yadir and I send each other messages throughout the day and I always have megabytes left in the data package using Nauta mail.”

Yadir and Dimairy are two of the users who still use foreign email-based applications to communicate. After the arrival of the Internet through mobile data in December 2018, many Cubans decided to migrate from CubaMessenger and Sijú. They moved to other platforms such as Messenger and WhatsApp, despite the costly data packages to connect to the Internet.

Others chose toDus, a kind of Cuban WhatsApp version operating through the Bolsa Correo for a few months, but it only offers domestic communications. The main reason why there are still some users on CubaMessenger and Sijú was their popularity reached when there was no access to the Internet via mobile data in Cuba. The other one is the price.

Both applications work with Bolsa Correo, which costs just 1 CUC (=USD) monthly and allows chatting in real-time like any other messaging service. To chat on Messenger, WhatsApp or Telegram, via 3 or 4G connections, requires at least one data package of 4 or 5 CUC.  The official average monthly salary in Cuba is around 25 CUC with many people earning less.

Choices depend on devices and $$ for mobile data

“The version for Cuba of Sijú has maintained significant numbers of downloads”, said Indatech, the application’s development team. However, they admitted the platform has had a considerable decrease in users. “The foreign version has been the hardest hit”, they added.

Regarding CubaMessenger, co-founder Yuniesky Alemán said he hasn’t seen a significant decrease in the number of users. “The figures are steady, yet messages are fewer. He notes that the advantage of the service’s SMS notifications is still used to write people in Cuba an urgent text”. According to him, calling and mobile phone top-up services are now used more than before.

When it comes to Sijú, Cuban users use a free limitless application while those outside the country pay to Indatech. The providers offer these users up to 450 messages daily, among other functions such as audio and video calls.

The free app has more than 100,000 downloads since it was published in the Google application store, where it is still available. The paid version has been “downloaded” from the same Web site more than 50,000 times.

As for CubaMessenger, both users inside and outside Cuba use the same application, but it is only free on the island. Outside of Cuba, the user must buy call minutes and messages as if it was a telephone operator. However, its website indicates that with an Internet connection messages are free. Since it’s available on Google, the app has been downloaded more than a half-million times.

Nevertheless, many people who got these apps may still show up as users even though they have uninstalled them from their devices.

“I stopped using CubaMessenger by February 2019, and I didn’t delete my account, I simply uninstalled the application”, recalls Amaurys Cid Fernandez, from Havana.

There are no public statistics that reveal how many Cuban users have switched to the most popular instant messaging services. However, Facebook’s presence in Cuba has clearly grown since the beginning of mobile data.

According to Statcounter Web site – whose access is blocked from Cuba – Mark Zuckerberg’s application occupies more than 60% of the social networks’ market through telephones since December 2018, reaching almost 100% between May and September 2019. In January 2020, SimilarWeb said Facebook Messenger is the messaging app most used in Cuba and the US, while WhatsApp leads in Latin America.

According to ETECSA, of the more than 6 million mobile lines, 3.9 million can access the Internet through mobile data. For 2020, it’s expected to reach 4.2 million, although it’s not stated how many users acquire the relatively expensive internet package each month.

If those statistics are correct, about two million lines would remain with email services as their only possibility. Sijú and CubaMessenger being their options to communicate with the rest of the world without using SMS or phone calls.