HAVANA,  Sep 16 (acn) When Cuba’s popularity grows in the global tourism market; this Caribbean island was elected venue of the 60th meeting of UNWTO Regional Commission for the Americas, convened for May 2016.

The Caribbean nation was chosen to host the important event, unanimously, in the framework of the UNWTO General Assembly, which runs by these days in Medellin, Colombia, and is attended by a Cuban delegation headed by Manuel Marrero, Cuban Tourism Minister.

According to a press release, the fact is irrefutable proof of the prestige and backing won by Cuba among UNWTO member countries. The note refers that Cuba has a large potential to develop in the current scenario of this sector, which grew by 17 percent so far this year regarding the arrival of foreign visitors, while it also increased the interest of investors from abroad.

” Cuba will continue offering tourism of peace, health and safety to our visitors and attaches great importance to the advancement of tourism and the bonds of friendship and cooperation that tourism allows to establish between the peoples and governments,” added the document.
After reaching the desired goal in 2014 of three million -record in the arrival of travelers-, reports of the current year are equally flattering to Cuba. According to official data, more than two million vacationers arrived in the Caribbean country from January to August, and it is expected by the end of 2015 to double that figure.

With a housing capacity that today is of 63,000 rooms -of which almost 70 percent are Four and Five stars-the island will continue investing to add new and better hotels in the coming years. Estimates indicate that by 2020, this infrastructure will reach 85,000 rooms.

It is also connected by air with more than 50 cities worldwide through 36 international airlines operating to the main poles, including Havana, Varadero, Santa María Cay, Jardines del Rey, Holguin and Santiago de Cuba. 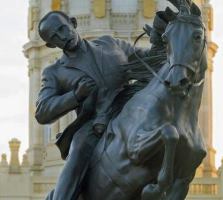