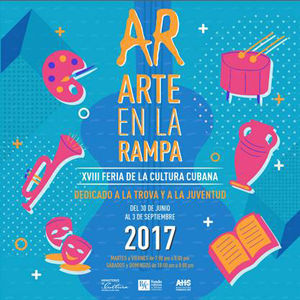 HAVANA, Jun 20th (PL) The 18th edition of the Arte en La Rampa Cuban Culture Fair will open its doors in Havana on June 30, with many varieties and proposals, until September 3, its organizers reported here Monday.

As usual, the event will be hosted by Pabellon Cuba, and this edition will be dedicated to the 19th World Youth and Students Festival.

Fostered by the Cuban Fund for Cultural Goods and the Hermanos Saiz Cultural Association, te event will show, offer and sell the work of outstanding Cuban artisans and artists, and will include activities for children and performances by dancing groups.

The objective of the Fair is to provide a wide range of recreational choices that meet the needs of the various audiences in a stage of the year as important as the summer, explained the Organizing Committee in a press release.

For this purpose, agencies such as the Cuban Recordings and Musical Editions Enterprise, Casa de las Americas and the Cuban Institute for Radio and Television (ICRT) will show their products and services to the population.

In other provinces of Cuba, there will be initiatives such as a fair called ‘El Caribe Hecho a Mano’ from July 3 to 9 in Santiago de Cuba, and others in Villa Clara.

Isle of Youth,home to the great ruin of an unusual and historic prison