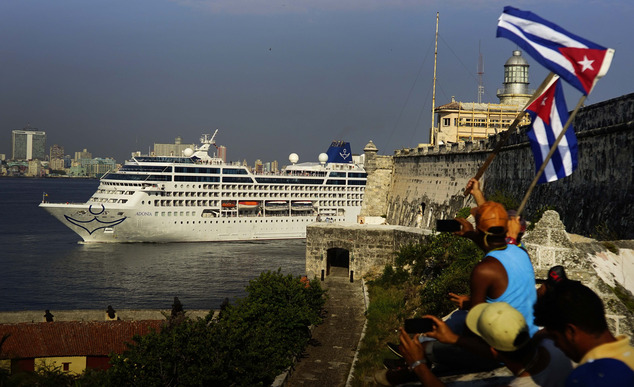 People waving Cuban flags greet passengers on Carnival’s Adonia cruise ship as they arrive from Miami in Havana, Cuba, Monday, May 2, 2016. The Adonia’s arrival is the first step toward a future in which thousands of ships a year could cross the Florida Straits, long closed to most U.S.-Cuba traffic due to tensions that once brought the world to the brink of nuclear war. (AP Photo/Ramon Espinosa)

HAVANA, june 10th Carnival’s new Fathom brand cruises to Cuba and the Dominican Republic, launched in May, appear to be experiencing growing pains.

Both offerings are different than anything else in the industry: The Cuba trips are the first U.S. cruises to the island nation in 40 years, and initially generated tremendous excitement. But travelers are giving them mixed reviews, complaining of confusion over how the tours are organized.

The cruises to the Dominican Republic, meanwhile, which invite passengers to volunteer on projects like reforestation and teaching English, are proving to be a hard sell and have been steeply discounted, with the initial $1,540 ticket price cut to as low as $249. “People don’t know why they would want go and pay to work somewhere,” said travel agent Gloria Hanson. “People want a vacation.”

Hanson sailed Fathom’s other itinerary to Havana in May and said that while it was a fascinating experience, that trip was different from standard cruises too. “This cruise is not for everybody,” she said. “It’s a tiring cruise. You’re walking, walking, walking. You’re not coming back to the ship to have drinks and party. It’s not that kind of a cruise.”

Even Fathom’s ship, Adonia, is different from the glitzy megaships that have become standard in the U.S. cruise industry. Adonia is smaller than many ships, carrying just over 700 passengers. It also has no casino and doesn’t offer the comedy clubs and Broadway-style productions that cruise passengers have come to expect.

Tara Russell, who heads the Fathom brand and has been on several of the cruises, says she’s not worried.

“We are pioneering two products the world has never seen,” said Russell in an interview. She said bookings have increased daily, many passengers have booked second trips, and the company is expanding marketing efforts, especially for the voluntourism trips, by reaching out to faith-based and alumni groups.

But travel agents say Fathom’s reception has been lukewarm. “Fathom seems to be having a slow start and the agent members of CruiseCompete are not 100 percent certain the ship will ever sell out,” said Heidi Allison-Shane, editor-at-large for CruiseCompete.com. She said CruiseCompete has had a number of requests for information about Fathom, “but very few bookings.”

Hanson said passengers to Cuba were confused about how the tours are organized. Many signed up for excursions organized by the ship, not realizing they could have created their own itineraries without violating U.S. rules that limit Americans visiting Cuba to certain types of activities like cultural exchanges.

“I was under the impression you had to do everything with the cruise line,” Hanson said. “That part was very confusing.” In addition, Fathom randomly assigned passengers to visit museums, historic sites or performance venues without giving them a choice. And while Hanson raved about a meal she had in an excellent private restaurant in Cuba, other passengers had mediocre food in state-run eateries.

The Cuba cruise Hanson took also lacked “crucial talks about the ports you’re going to. Every cruise I’ve ever gone on always had a seminar talking about tomorrow’s port and the things to do.” Hanson said that type of information is especially important for Cuba because Americans have been cut off from the country for so long.

Russell said Fathom has already tweaked some programs with additional changes coming to give passengers more information, flexibility and customization in tour options. Some tour guides are also being given more training to upgrade their skills.

Russell added that because U.S. policies on Cuba “are changing every day,” the company had a hard time adjusting programs to keep pace. “It would be crazy to think that everything would have gone perfectly. We were negotiating policy last minute,” she said.

Sharon Kenny, a writer for Porthole Cruise Magazine, took Fathom to Cuba and the Dominican Republic and said both experiences were worthwhile. But she said travelers need to understand that this is “not the traditional cruise in that you’re not going to be drinking hard, you’re not going to be in a bathing suit.”

Kenny recalled crowds in Havana greeting them with shouts and high-fives, and said she still gets teary remembering a woman who told her: “We’re so glad you’re here. We’ve been waiting for you so long.”

Kenny’s experience in the Dominican Republic was also meaningful. “I have volunteered on other worthy causes before, but I’m often left wondering if what I did really mattered,” she said. But she was certain that the work her Fathom group did — replacing a dirt floor in a family’s home with concrete — made an impact. Others who volunteered with Fathom in the Dominican Republic agreed, speaking glowingly of their experiences planting trees, teaching English and sorting cocoa beans in a chocolate factory.

Colleen McDaniel, managing editor of CruiseCritic.com, was on the first sailing to the Dominican Republic and said “it’s a radically different idea.”

“They’ve launched a brand new product nobody’s ever attempted before,” she said. “They are still fine-tuning and doing some tweaking and they’ll be the first to tell you that. They’re very open to feedback. After every excursion you are given a survey to give your immediate feedback, what did you think of this and how would you make improvements. They’re really listening and trying to make changes.”

Russell acknowledged that “Fathom is not for everyone.” But she added: “We’re very pleased with the progress we’re making.”