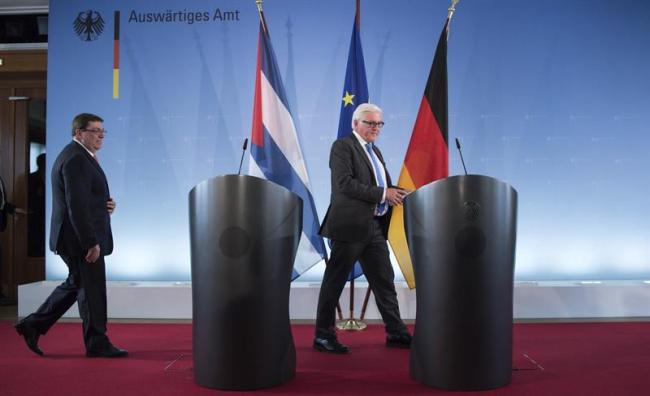 HAVANA, May 11 (Prensa Latina) The Minister of Foreign Affairs of Germany, Frank-Walter Steinmeier announced today during a visit of his Cuban counterpart, Bruno Rodriguez Parrilla, the signing of two bilateral agreements.

According to the diplomat, Germany and Cuba discussed for more than a decade the signing of a cultural agreement, which is now coming to fruition. Both countries are preparing the installation of an office for economic relations of Germany in Havana.

During a press conference at the Ministry of Foreign Affairs in Berlin, Frank-Walter Steinmeier expressed his confidence in the fact that both agreements will be signed in the course of this year. Steinmeier also congratulated Cuba for ‘overcoming the Cold War’, referring to the recent rapprochement between Cuba and the United States.

Rodriguez Parilla’s visit is the first visit to Germany made by a Cuban Minister of Foreign Affairs since the reunification of this European country. After the rapprochement process between Washington and Havana started, Germany also seeks to improve relations between both states.

In July last year, Steinmeier traveled to Cuba, while in January, 2016, the German Minister of Economy visited Havana with a delegation of 60 businessmen. Meanwhile, Steinmeier stressed Germany’s interest in investing in Cuba. Rodriguez Parrilla referred to the negative effect of the US blockade even in the case of powerful countries, like Germany.