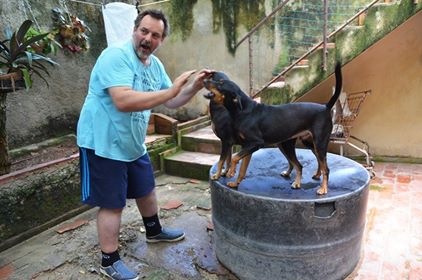 HAVANA, Jan. 23th (HT) The issue of animal protection in Cuba is in full swing. Social media has become a platform where animal rights groups do activist work which affects real life and is slowly turning around the fate of thousands of dogs and cats who try and survive on the island’s streets.

Animals who once had a home or whose children were born under a roof. Without an Animal Protection Act in force, animal abandonment, abuse, cycles of uncontrollable mating and entire litters abandoned, are a reality we’ve had to accept for decades. There have even been cases of zoosadism where the victims have suffered and been completely helpless.

This landscape doesn’t escape foreign visitors, who can see the deplorable state of stray dogs and cats wandering in public spaces.

Oliver Doehring is a German comedian who has been coming to Cuba for 15 years. He once watched how a puppy was run over by a truck. It really hit him hard. He worked as a farmer at an East German company, with 200 cows under his care, and he has always lived with animals.

The first time he came to Havana, he saw a stray dog that looked very much like his four-legged friend for 17 years. At that moment, he realized that his dead dog had given him a mission.

HT: What is the situation of animals in your country? Do they have protection laws?

There are also problems, of course, but they aren’t as serious as they are in Cuba. We have animal protection laws that are constantly being improved for the better. These apply to every species, whether it’s a cow, a cat or a snake. Animal torture is a crime. Lab animals are only used for medical research. They are banned for cosmetic testing. Service animals, such as guide dogs, are even more protected and receive Government support. They can travel on trains or buses without having to pay.

Can people be sent to jail for cases of zoosadism?

They can be sent to jail in some cases. Most of the time, they just receive hefty fines. People committing these crimes have a much greater problem in Germany, Austria, France, Switzerland, etc. They are seen as outcasts in society. They can even face becoming victims themselves. That shouldn’t happen of course, there are laws which lay out the right punishment. But it has happened.

HT: Are there public education programs which focus on sensitizing children and young people about humans’ responsibility for animals and the environment?

The environment and Nature conservation are already subjects that are dealt with at school. More and more in recent years. I’m sure you know about Fridays For Future (a student strike that young activist Greta Thunberg began, which had global repercussions). It is also about how we can protect our planet. The reality is that industrialized Western countries are creating too much waste. Mostly plastic. This is a particularly controversial issue amongst young people, it’s a good thing. We only have this planet.

HT: I understand that the vegan movement in Germany is quite strong. What factors do you think have driven this phenomenon? Are young people also taking part spontaneously?

Becoming a vegetarian or vegan is a personal decision. But more and more people are wanting to live this lifestyle. In Germany, around 8 million people are vegetarians and 1.3 million, vegans. There are some 2000 new vegetarians and 200 vegans every day! This isn’t only something that young people are going, even older people are deciding to adopt a different lifestyle to the one they were raised with. I eat meat, but I take care to look for quality meat and I don’t eat it every day. Animals need to have lived a proper life for the species and have been killed without suffering.

HT: Do you see veganism as a way out of recycling the age old violence humans have established?

Of course, it’s better to eat a more vegetable-based diet. However, that involves a lot of education. In Germany, 50% of the food we produce is destroyed, because it hasn’t been consumed and to keep prices stable. It’s a bad practice. However, people are becoming more and more aware and realizing that we can’t carry on like this. I’m sure that many things will change in Europe in the next few years. And that’s a good thing.

HT: How can a foreigner help Cuban business owners?

It’s very simple. Cuba has many advantages: you have great education and very good ideas. It’s up to a new generation of politicians to make the most of this potential. Namely, we advise Cubans if they have an idea. You know how Cubans think, we know how tourists think, so we know both sides of the coin. We have a professional online company. We make websites for Cubans, in up to 8 languages a lot of the time. So, if a Cuban has an idea for a service in the tourism sector, we make a professional website. Right now, we are number 1 when it comes to Classic Cars Tours in Havana.

HT: And how can you help when it comes to animal protection?

In a really short period of time, I have been able to find people in Germany who want to collaborate including vets, animal food producers and also some German-Cuban artists. Roberto Blanco, who is a superstar in Germany, has sponsored our animal protection project.

In summer 2019, I brought over an entire suitcase of medicine, shampoo and food especially made for puppies and kittens in Havana. I only left a little space in my suitcase for clothes, but I have good friends here who offered to wash my T-shirts… My goal is to create an animal shelter and clinic. I might sound crazy, but I’m a well-known comedian back in Germany. So being crazy features as part of my job description. We can do it!

HT: Do you believe that change for the better in the situation of Cuba’s stray animals is possible? 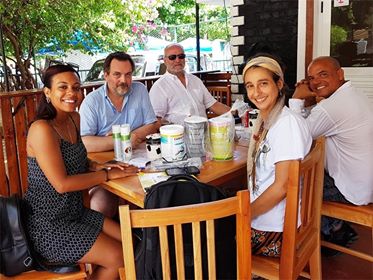 Yes. It’s important that the sterilization program continues to be implemented. Secondly, people need to learn about and understand animals. Aniplant and CeDA are already doing a really great job in these two areas, but they still need help.

HT: Have you noticed any progress ever since your first visit here?

It’s improved, but there are still many animals on the street who need help. An animal is a living being, it doesn’t want to be sick. Many people don’t even know how pretty dogs and cats can be when they get rid of their skin diseases and internal parasites. And I also know that a person who hates animals, can’t be a good person.

I went for the first time in summer 2004, when I met Alejandro who is my business partner today and one of my best friends. I have been coming at least once a year since 2004. Today, I am very close to two families. When I come they greet me with: “Welcome home!” I think that’s the best compliment there is. You’ll only find Cuban stamps in my passport.

I love this country, especially its people. I see a lot of potential, and you need people who think outside of the box to use it. It isn’t a question of socialism or capitalism. There isn’t a perfect system. Our planet has space for everyone, and I would like it if Cubans were also able to see this world. If they realize that things aren’t perfect in the US, Germany or France, they’ll come back to Cuba.

I believe that I am the best example: I have seen every continent and many countries. Personally-speaking, I think Cuba is the most beautiful island in the world. But its people also need greater freedom. However, that’s not my job. Unfortunately, Donald Trump made some very stupid decisions. I saw the greatest changes after US citizens were allowed to travel to the island. The Cuban people were able to make friendships and lots of private small businesses appeared which are now slowly dying.

If you think about it, Cuba has everything within its reach. It doesn’t need to develop the wrong way, like industrialized countries have. It has the best rum in the world, the best cigars, it has great marble and is the perfect island for holidays. There’s nothing Cuba should be afraid of.