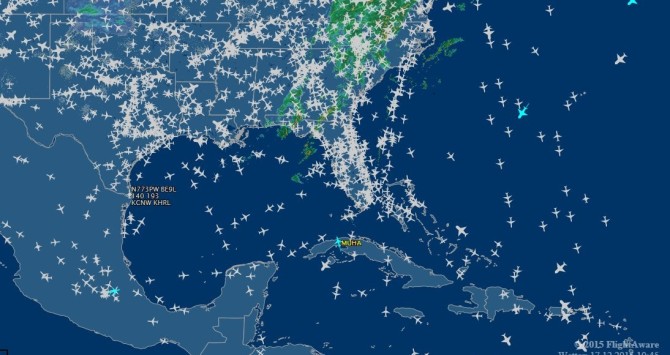 HAVANA, Feb. 16th This will be a big week in the evolving U.S.-Cuba relationship with the signing of a new civil aviation agreement, a Cuban foreign trade minister visiting Washington and another round of U.S.-Cuba talks.

It begins with the signing of an agreement in Havana that will allow regularly scheduled airline service between Cuba and the United States for the first time in more than five decades.

The milestone agreement takes effect upon signing Tuesday morning at Havana’s historic Hotel Nacional. That means U.S. airlines can begin submitting applications for routes serving Havana and nine other Cuban cities with international airports from any U.S. city. The pact allows for up to 20 flights from the United States to Havana daily and up to 10 each for the nine other cities.

After the Department of Transportation receives applications, it will decide flight frequencies and which airlines will get which routes based on market considerations. The Havana route is expected to attract the most competition.

Since President Barack Obama announced in December 2014 that the United States and Cuba had begun the process of normalizing relations, “U.S. carriers have been very intrigued and interested about this potential opportunity,” said Brandon Belford, deputy assistant for aviation and international affairs at the Department of Transportation.

Decisions may be made on less competitive routes sooner, but U.S. officials said the process should be completed by this summer with commercial aviation service between the two countries beginning by fall.

While Foxx is in Havana, Cuba’s Minister of Foreign Trade and Foreign Investment Rodrigo Malmierca will be in Washington. He arrived Sunday and is leading the largest delegation of Cuban officials to the nation’s capital in decades. It includes officials from the Ministry of Foreign Affairs, Cuba’s Central Bank, the trade ministry, the Chamber of Commerce and executives from Cuban companies.

On Tuesday, Malmierca will speak at the U.S.-Cuba Business Council and then lead the second round of regulatory talks between the United States and Cuba, which is scheduled Wednesday and Thursday. Malmierca also plans an official visit with Virginia Gov. Terry McAuliffe, who recently led a business mission from his state to Cuba.

U.S. Commerce Secretary Penny Pritzker, who visited Cuba last year, and Malmierca will open the second round of the U.S.-Cuba Regulatory Dialogue. During the two days of talks, the U.S. delegation will go over the latest set of U.S. regulatory changes announced in January and the challenges facing U.S. companies who want to do business in Cuba. Among the highlights of the changes were allowing financing of exports of goods and services authorized for Cuba.

The Cuban delegation is expected to discuss its economic system and rules for financial transactions and importing goods and services.

“Our second U.S.-Cuba Regulatory Dialogue is another opportunity to work directly with our Cuban counterparts to better understand the way our two governments and economies can work together in support of the Cuban people,” said Pritzker.

American business people and policy makers will have a chance to mingle with Malmierca and the Cuban trade delegation Tuesday at a meeting of the U.S.-Cuba Business Council in Washington. The Council, which was created last year, is affiliated with the U.S. Chamber of Commerce and advocates for reforms both in the United States and Cuba to enhance the economic relationship between the two countries.

“Minister Malmierca’s upcoming visit, together with the U.S. regulatory changes announced a few weeks ago, create unparalleled opportunities for the United States and Cuba, particularly in the areas of travel and small business growth,” said former U.S. Commerce Secretary Gutierrez, who earlier this month was elected chairman of the Council.

Malmierca and Gutierrez, who served as commerce secretary from 2005 to 2009 in the George W. Bush administration, will hold a news conference at the conclusion of the Council event.

The week’s U.S.-Cuba events, plus Cuba’s recent return of a U.S. Hellfire missile that it said was mistakenly shipped to Havana from Paris in 2014, give impetus to the possibility that Obama may visit Cuba during the first quarter of the year. The president has said he would like to visit Cuba before the end of his term. In December, he said such a visit was conditioned on more progress in his priorities for Cuba such as a bigger role for private enterprise, improvement in Cuba’s human rights record and more access to information and the Internet for Cubans.

The Cuban trade delegation’s “visit along with the restoration of the first U.S. commercial flights to Cuban in more than 50 years are important steps forwards in our policy of engagement and show what can be accomplished when there is meaningful, constructive dialogue between our two countries instead of the decades of isolationist policies that preceded it,” said James Williams, President of Engage Cuba, a public policy group that supports normalization.