HAVANA, May 1th The shipping companies that have been sued in Miami for using Cuban port facilities nationalized after 1959 have transferred a petition to the 11th appeals circuit in Atlanta, Georgia, in the sense that it be considered an argument against the decision of a Miami judge.

The appeal is related to the fact that Judge Beth Bloom decided to reverse a ruling she made earlier, according to which the case should not prosper because the claimants―the Carnival, Royal Caribbean, Norwegian and MSC Cruises shipping companies, sued by Havana Docks Corporation―argued that the Havana port facilities, the pier today known as Sierra Maestra, were nationalized before it was called Cruise Port.

The shipping companies’ argument argued that when they started using it in 2016, the concession―which dates back to the beginning of the 20th century―had expired in 2004.

The criterion was initially accepted by the first judge in charge of the matter, James Lawrence King. But later, when the case passed to Judge Bloom, she changed her mind and agreed with her predecessor. Now the four shipping companies have appealed to the 11th appeals circuit to establish that the decision is not right because, in reality, the expiration of the concession to the Havana Docks Company ended before the shipping companies used those facilities.

“Judge King basically said that [the plaintiff] was right. But he was going to allow all parties to have their say. Later, when she handled the case, Judge Bloom initially said no, but after hearing other arguments, she changed her mind. This, by chance, gave the plaintiffs the reason. Judge King’s decision was logical because it left open the possibility for everyone to openly develop their arguments,” explained Kavulich.

According to two anonymous sources, both judges concluded that since 22 years have passed after the Helms-Burton Act started being applied, these are not the same times as back then (1996).

Here, said one of the two sources, the change in position of Judge Bloom must be taken into account. She operates in an environment deeply permeated by the Cuban-American influence, which advocates the strict application of the Helms-Burton Act. After all, it is no secret to anyone in Miami that the political environment influences judicial decisions. No one was surprised that Bloom reversed the irreversible.

This Wednesday no spokesperson for the 11th appeals circuit confirmed the date of the appeal hearing.

Sights set on Visa and MasterCard

On the other hand, on Wednesday of last week, a Cuban-American family filed a lawsuit in another Miami court against the financial companies MasterCard and Visa for financial transactions in Cuban tourist entities that operate under Spanish administration.

“This is a new way of dealing with foreign investment in Cuba; it is still early to see what will happen,” explained Kavulich. The lawsuit, filed as part of the activation of the Helms-Burton Act a year ago, has been filed by the family of Robert Glen, residing in Texas. He argues that the companies Visa International and MasterCard International process through their networks the collection of the operations of hotels under Spanish administration, such as Iberostar Tainos, Meliá Las Antillas, Blau Varadero and Starfish Varadero.

But, Kavulich adduces, the truth is that the head office of Visa and MasterCard is American and there is a commercial transaction. “Let’s see how the judges react to this,” he said. If “a judge orders the cessation of these transactions, the impact on Cuba will be enormous. But it is early to speculate,” he added. 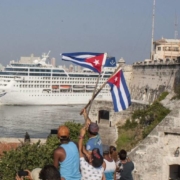 US Condemns Shooting at Cuban Embassy in Washington
Scroll to top