on the eve of the II Cuba-EU Joint Council, which will follow up on the bilateral Political Dialogue and Cooperation Agreement (ADPC) among other matters.

The Cuban Foreign Minister highlighted the “fruitful meeting” with Mogherini and the “good state of relations” between Cuba and the European Union, at a meeting in which they also discussed the “new measures” to block the United States and other issues of the international agenda “

Rodríguez and Mogherini will chair the delegations of Cuba and the European Community bloc in this new Council tomorrow, the second after the one held on May 15, 2018 at the EU headquarters in Brussels.

This meeting will analyze the political dialogue initiated in the framework of the agreement in fundamental areas, examine bilateral relations and cooperation programs in areas such as culture, energy, agriculture and economic modernization, as reported by the EU.

The parties will also discuss the creation of dialogues on sectoral policies in some of these areas, as well as opportunities to strengthen cooperation.

The Political Dialogue and Cooperation Agreement, the first bilateral pact between the European bloc and Cuba signed in 2016, entered into force provisionally in November 2017 and ended two decades of the so-called “common position”, which linked all progress in the bilateral relationship to progress in democratization and human rights on the island.

During the first year of application of said agreement, the first Joint Council and the first Subcommittee on Cooperation were held with positive results; as well as the five planned political dialogues, according to diplomatic sources.

The agenda of this Cuba-EU Council in Havana also includes issues such as trade and investment, as well as the extraterritorial consequences that arise from the activation of the Helms-Burton law of the United States, legislation passed in 1996 whose title III was put into effect last May by the administration of Donald Trump.

This measure makes it possible to file lawsuits with US courts for the use of nationalized land and property in Cuba after the 1959 revolution and adds to other Washington sanctions that prohibit US cruise trips to the island, provisions that have been considered by the EU. as “extraterritorial” and “unilateral”.

Since title III of the US legislation passed in 1996 received green light, lawsuits began to appear that have also affected foreign companies operating in Cuba, such as the Spanish hotel companies Meliá, Iberostar and Barceló, the Canadian Blue Diamond and the French Accor , as well as the tourist booking platforms Trivago, Booking and Expedia.

State media on the island today highlight that Cuba maintains full diplomatic relations with the 28 EU member states, as well as the celebration last year on the 30th anniversary of the establishment of ties with the European Community.

They also highlight that cooperation includes areas such as food security, adaptation to climate change, renewable energy and the exchange of experiences for the modernization of the Cuban economy, as well as the 2014-2020 Indicative Program to which the EU allocates a 50 million fund. of euros (equivalent to 55.1 million dollars) for projects in the Caribbean country.

Federica Mogherini, visited today the reconstruction works of the former Convent of Santa Clara, which with EU funding will become a school for the Training of Arts and Crafts of the Restoration of Cuba and the Caribbean, as explained in detail the Historian of the City, Eusebio Leal. 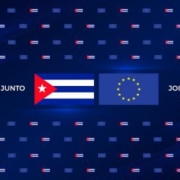 Cuba and the EU to hold talks in Havana

The Restauration of the Railway Museum in Havana is underway