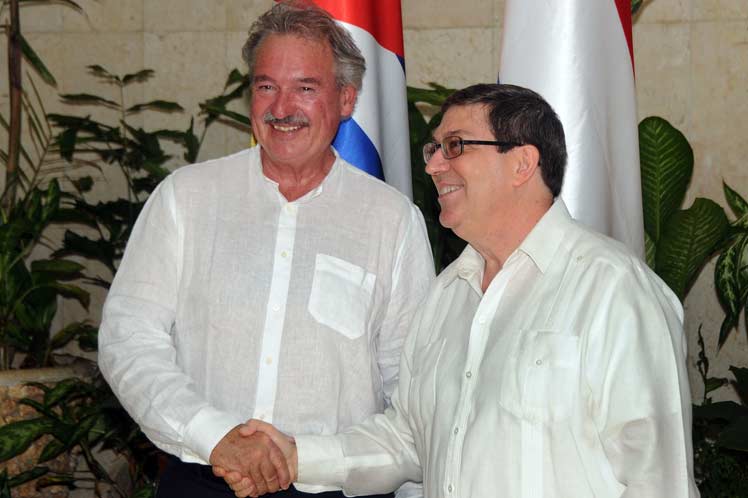 HAVANA, Jun 12 (PL) Cuban Foreign Affairs Bruno Rodriguez Parrilla received Jean Asselborn, Minister of Foreign and European Affairs, Immigration and Asylum of Luxembourg in a meeting in which both officials ratified the excellent bilateral links between their respective countries.

‘We thank the active role of Luxembourg in the improvement of the relations between Cuba and the European Union (EU),’ said Rodriguez.

Rodriguez regarded the relations with the Great Dukedom of Luxembourg as ‘positive, historical and mutually favorable.’.

Rodriguez was also grateful for the role of Luxembourg in the cuban struggle for the lifting of the US economic, financial and commercial blockade against the island.

He added that this year is the 75th anniversary of the establishment of the diplomatic links and expressed his wish to increase them, in the cultural, academic, scientific and economic fields.

Asselborn, who visits Cuba for his 2nd time, reiterated that Luxembourg may contribute to improve the Cuban relations with the EU.

‘We have to be together, with respect and understanding,’ assured Asselborn, ratifying that has scheduled more meetings with Cuban authorities.

Luxembourg is a dukedom made a country, without an exit to the open sea in the north of Europe, surrounded by Belgium to the west, France to the south and Germany to the east, with a population of 500,000 inhabitants on an area of 2,586 square kilometers.