HAVANA, Nov. 22th  First it stormed living rooms via television, then it took the streets, where joyous shouts of “Gooooaaal” have gradually replaced the bellowed “Strike!”

In the battle for the hearts and minds of Cuban kids, football is threatening to topple baseball as the island’s most popular sport.

“Football here was on the floor and now it’s heading to the top as the national sport,” said a resigned Humberto Nicolas Reyes, who has coached young baseball hopefuls for 40 years.

Reyes is proud of his association with Major League Baseball stars like Yonder Alonso and Alex Sanchez, players he coached as young boys.

But crouching down to show a kid how to gather a ball in his glove during a recent practice, he admits: “Almost everyone has gone over to football.”

Strikingly, observers say the trend is gathering pace even as baseball is set to return to the Olympics in Tokyo 2020 following a 12-year absence.

Cuba, which has used its success in athletics, boxing, and baseball almost as an arm of diplomacy since Fidel Castro’s 1959 communist revolution, can point to three Olympic titles and 25 world championships in baseball.

But on the streets, football is the new champ.

“Today the kids and young people are more inclined to take up football than to take up baseball,” Cuba’s national football team coach Raul Mederos told AFP as he watched players training at the Pedro Marrero stadium.

Once a rarity, it’s become common for people to get up in the early hours to watch a televised European game, or to see kids playing street football wearing shirts bearing the names of Messi or Ronaldo.

“We play everywhere we can,” said sports student Alejandro Izquierdo, 19, as youths played an evening practice game under a glowing neon mural of Che Guevara. 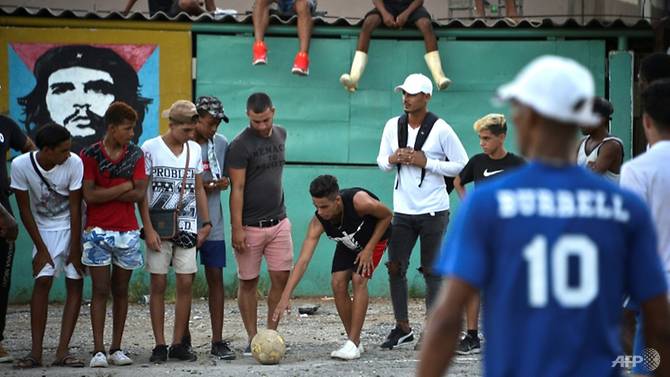 Many young Cubans have forsaken baseball, for so long the national sport, for football AFP/YAMIL LAGE

Izquierdo said he dreams of Cuba qualifying for the World Cup finals, something it has managed only once, in France in 1938.

TV has played a major role in Cuba’s new-found fervor for football, helping it win over many traditional baseball fans.

“There are eight baseball games being played at 2 o’clock in the afternoon and they don’t air any of those games. Instead we’ll see Barcelona’s match on the TV,” said Eduardo Medina, a 65-year-old fan.

“What does that tell you? That football is slowly squeezing it out,” said Medina, watching from the stands at Estadio Latinamericano — the cathedral of Cuban baseball — where La Habana was taking on Las Tunas from the east of the island in a league game.

Contrast that with baseball coverage.

State television has aired US Major League Baseball games only since 2013 — and then only those that do not include Cuban players. They were still considered “deserters” until recently, though there are tentative signs that the official tone is changing.

Last year, for the first time, the TV showed recorded World Series games — which featured Cuban players. However, this year the fans were left wanting once again when it wasn’t broadcast.

“These things have been lacerating baseball fans in Cuba,” lamented Pablo Diaz, a 32-year-old fan.

The quality of Cuban baseball has suffered and the national team hasn’t won a meaningful event since the 2006 Intercontinental Cup.

At grass roots level, costs can quickly add up. A baseball glove costs the same as a football, around $30 — roughly equivalent to a month’s salary — and a team needs nine gloves, in addition to bats and balls.

Football is cheap by comparison. 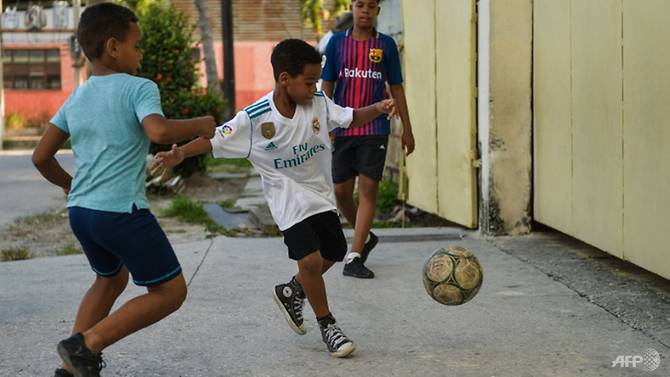 But Cuba’s baseball authorities are not taking football’s challenge lying down. Eyes firmly set on qualifying for Tokyo, they have modified its championships structure to make it more competitive and have begun remodeling its main stadiums.

“WE HAVE TO LEARN TO CO-EXIST”

According to official figures, football clubs have a growing membership of 25,000 members, while 46,000 are registered with baseball clubs.

“Baseball is the national sport and no one is going to change that,” said football coach Mederos. But he stressed “we have to learn how to co-exist with baseball” as is the case in neighboring countries Venezuela and Panama.

Hit by defections and a lack of international competition, the Cuban national football team has been on the wane since 2004, when it drew home and away with Costa Rica, the Caribbean’s best team.

But as it prepares to participate in the US Gold Cup in 2019, there are signs that attitudes are beginning to change among Cuba’s sports administrators.

The Cuban Sports Institute (INDER) is gradually opening the door to athletes who emigrated and remain active, and no longer uses words like “traitor” or “deserter” when referring to exiled players.

For the first time, INDER has given approval for Mederos to include foreign-based players in the national team. Other sports are looking on with interest, baseball among them, at a move that could eventually open the way for the rehabilitation of some of the island’s other sporting exiles.

For Mederos, it’s a move in the right direction: