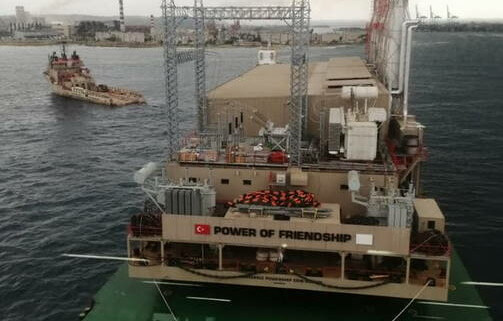 HAVANA, Nov 30th  A new floating power plant has arrived in Cuba and the government reported that it will locate it in the Bay of Havana. Lazaro Guerra Hernández, technical director of the Cuban Electricity Union, indicated this Thursday on Twitter that the floating power generation plant must provide 130 megawatts (MW) of power to the National Electric System.

The Cuban people have been suffering from long blackouts for decades and when at times it seems that energy generation is going to stabilize, a new crisis always appears or components of the old Cuban power plants are “affected”.

The arrival of the floating power plant in the midst of the current energy crisis that Cuba is suffering, responds to an agreement between the government of the island and the Turkish company Karadeniz Holding. Floating power plant arrives in HAVANA to locate in the Bay of Havana

These types of power plants are also known as “jerks”. It is a project that included Cuba in a group of nine countries with floating facilities for the production of electricity. According to the press, it is the first project of its kind in Latin America.

The contract between the Turkish company and Cuba was signed in October 2018, with Energoimport to provide 160 MW electricity for 51 months. Since 2009, Karadeniz Holding is bringing technology from Turkey to other countries with its global brand Karpowership.

The floating power plant of Karadeniz Holding located in Mariel was connected in 2019 to the Cuban grid to supply the National Electric System for a period of four years. In other words, three of those years have already passed and the results have not been visible to the Cuban population.

The Unión Eléctrica de Cuba continuously reports new impacts on the service due to a deficit in generating capacity during peak hours.

At the beginning of November, the Santiago de Cuba Electric Company warned of possible blackouts in the province during the next few days. They assured that the power outages are the consequence of another break-in unit seven of the “Otto Parellada” Thermoelectric Power Plant (CTE) and unit four of the “Diez de Octubre”.

They announced that the usual organization should be maintained with six blocks of disconnection of the electricity service, each one with approximately four hours of affectation, but they warned that the planning may vary depending on the conditions that exist in the National Electroenergetic System and the balance that is achieved. between demand and generation.

Leonardo Padura: exile is one of the greatest dramas for Cubans