HAVANA, 5 Aug. With the start of InterCaribbean operations between the Dominican Republic and

Cuba is already five airlines that meet the demand for flights between both countries.

The connections between both Caribbean islands, where, in addition to Intercaribbean Airways, the following airlines are currently operating:

Copa Airlines: Unites Santo Domingo with Havana, Holguin and Santa Clara. It also has a connection between Santiago de los Caballeros and Havana.

Cuban Aviation: Offers a route between Santo Domingo and Havana.

Lyndon Gardinet, president of InterCaribbean Airways, said that “We are very proud to be part of the tourism development and growth that the Dominican Republic exhibits as we continue to expand our offer in passenger transport throughout the Caribbean.”

The flight (JY 2233) was the first of this great alliance, which was received at the Dominican airfield carrying 45 passengers on board. In the act they were present in addition to Gardinet; Julio Bobadilla, AILA operations manager; Luis José López, communications director; Álvaro Leite, commercial director, and Carlos Núñez, commercial deputy director of Dominican Airports XXI Century (Aerodom); Lissette Valenzuela, airport director of the Ministry of Tourism (Mitur) and Carolina Torres, Marketing coordinator for InterCaribbean. 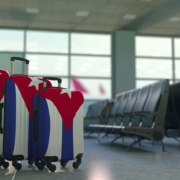 Airlines will wait and see in Cuba