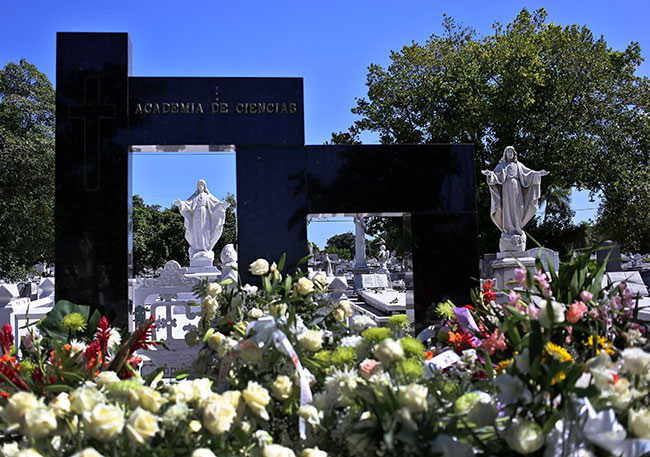 The son of Fidel and Mirta Diaz-Balart – known as “Fidelito” – committed suicide last Thursday at age 68 and was interred in the presence of his mother, sisters, nieces and nephews, children and grandchildren in the Colon Cemetery at the Cuban Academy of Sciences burial site, EFE learned.

The funeral for the vice president of the Cuban Academy of Sciences was held on Sunday, as per the social network posts of several people attending the solemn and intimate ceremony.

Cuba’s state-run media have not yet published anything about the funeral, although an official announcement of Castro Diaz-Balart’s death had appeared.

The family’s only public remarks concerning his death were made last Friday by the daughter of Cuban President Raul Castro, Fidelito’s cousin Mariela Castro, who expressed thanks on Twitter and Facebook for the condolences the family had received.

Castro Diaz-Balart, the only son of the marriage between Fidel Castro and Mirtha Diaz-Balart, also served as a scientific adviser for the Cuban Council of State, the communist island’s top government body.

According to the official communique about his death in state-run media, Fidelito has been suffering from “deep depression” for which he had been undergoing treatment for months.

“As part of his treatment, he initially needed to be hospitalized and then followed up as outpatient during his social reintegration,” the statement said.

Educated in the now-defunct Soviet Union, where he studied under a pseudonym for security reasons, and ultimately receiving a Ph.D. in Mathematical Physics, Castro Diaz-Balart between 1980-1992 was the Cuba’s top nuclear policy official and was in charge of the unfinished construction of the Jaragua nuclear power plant, which would have been the first facility of its kind on the island.

After his parents divorced in 1954, he lived until he age 10 with his mother, who remarried attorney Emilio Nunez Blanco and settled in Madrid in the 1970s.

There is little publicly available information about Castro Diaz-Balart’s personal life, but he initially married Russia’s Natasha Smirnova, with whom he had three children and, after divorcing Smirnova, he married Cuban citizen Maria Victoria Barreiro.
http://www.laht.com