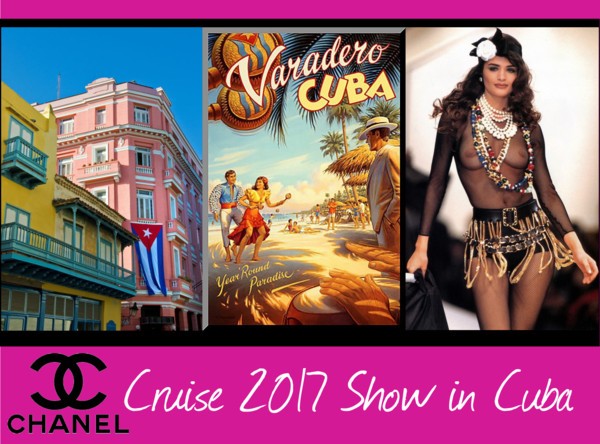 Chanel will be the first major fashion house to send models down the catwalk in Cuba, highlighting warming relations with the West. The exclusive show is also a reminder of new inequalities on the Communist-ruled island.

Karl Lagerfeld, who has been at Chanel’s creative helm since 1983, has said his latest inter-seasonal Cruise collection was inspired by the “cultural richness and opening up of Cuba.” Former Cold War foes the U.S. and Cuba, formally agreed to restore diplomatic relations last July. Cuba has since improved relations with other western nations.

Chanel Fashion Chief Bruno Pavlovsky told Reuters the label was uncertain at first if it could hold the show but said Cuban authorities had been “very welcoming and helpful.” Some Cubans are critical. Chanel goods are not sold in Cuba and most locals could not even dream of affording them, given even a small handbag costs thousands of dollars.

Pavlovsky said it was too early for Chanel, which has fewer than 200 boutiques worldwide, to set up shop in Cuba.

“This is an event for very few people,” said student Heidi Lopez, 23, as she left the University of Havana for the day. “We can’t enjoy it… and even less aspire to buy any product.” Others say the show is giving their dreams wings to fly.

“Chanel is very good quality and also very expensive,” said Marilia Veliz, 44, an accountant and fashion lover who had sewed details like a satin bow onto her brown and cream work uniform. “Just because I can’t afford it doesn’t mean I want to deny others that luxury. And who knows, maybe one day. It’s important to dream.”

Cuba is fast becoming one of the world’s most fashionable destinations, as tourists and the style elite seek to savor faded glamour and Caribbean flair before it changes too much. “Hola Cuba!” wrote Bundchen on her Instagram account on Monday, posting a photo of a Havana downtown park that received around 110,000 likes.

By showcasing its Cruise collection in Cuba, Chanel said it was harking back to the roots of the line originally designed for wealthy Americans holidaying on yachts and cruises in the Caribbean to escape the winter gray. U.S. cruises to Cuba were forbidden during the country’s standoff with the United States.

On Monday, the first U.S. cruise ship to sail to the island since Fidel Castro’s revolution docked in the capital, greeted by cheering local residents. Lagerfeld, 82, is known for his lavish show settings and has created a mock casino, supermarket and brasserie in the past.

Secrecy has shrouded the preparations for his runway in Havana, which will take place in the Paseo del Prado, a leafy promenade lined with marble benches, ornate street lamps and bronze lions that leads down to the Caribbean seashore.

Built in Cuba’s golden era when it was a wealthy port, colonial colonnades and elegant Art Deco buildings on either side of the boulevard are now in various states of disrepair although some are being renovated.

Founded by Coco Chanel in 1909, privately-owned Chanel is one of the world’s most recognized labels and the second-biggest luxury brand behind LVMH’s Louis Vuitton.