HAVANA, Apr 2 (IANS) The European Union (EU) has agreed to mediate in Cuba-US relations, according to a local media report.

EU High Representative Josep Borrell has accepted a request made by the Group of Friendship and Solidarity with the People of Cuba in the European Parliament “to mediate before the US government in order to remove Cuba from the unilateral list of countries that encourage terrorism”, Xinhua news agency quoted the report as saying on Thursday.

In a letter written by Borrell to members of the European Parliament, which was made public Wednesday on Twitter, the high representative said: “In our contacts with the new U.S. administration, we will address this issue and call on the U.S. to lift this designation.”

“Cuba does not sponsor nor promote terrorism. We support peace, solidarity and collaboration between peoples,” she said.

Cuba was first designated by the US as a state sponsor of terrorism in 1982 and was removed from the list in 2015 under the administration of then resident Barack Obama as the two countries re-established diplomatic ties.

However, on January 11, 2020, just a few days before then US President Donald Trump left office, then-Secretary of State Mike Pompeo announced that Washington had restored Cuba to the list.

In March, White House Press Secretary Jen Psaki told reporters that the US is committed to reviewing the Trump administration’s designation.

But she also said, “a Cuba policy shift is not currently among President (Joe) Biden’s top priorities”. 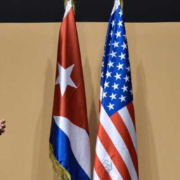