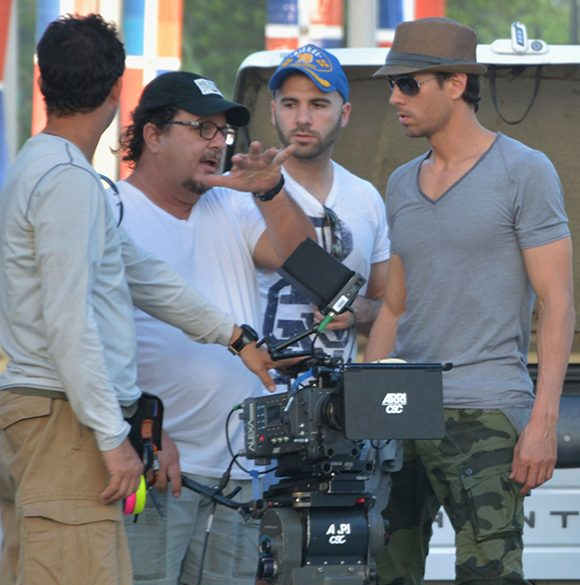 Cuban signer Descemer Bueno and Puerto Rican Reggaeton duo Zion y Lennox, who are both featured on the new single, also traveled to Havana for the video shoot.

Iglesias posted a second video on Instagram from the first day of filming with Bueno. The two are seen sitting in a red school bus in the middle of a busy Havana neighborhood.

Footage from CiberCuba shows Iglesias walking down a street, stopping to take photos with locals. A crowd of people was also seen standing around a group of children and Carnival dancers.

Zion Y Lennox also posted a photo to Instagram posing in a pink 1950’s style convertible with a Cuban beach as the backdrop.

Cuban director Alejandro Pérez is filming the video. Pérez is the mastermind behind Iglesias’ 2014 mega-hit “Bailando”, which included footage from Cuba.

Iglesias is said to have waited more than an entire year for the chance to film the new video in the Cuban capital.

Cuban authorities had suggested the famous “Tropical Pink Room” as their film site – to avoid wandering eyes and the prying camera flashes. Instead, the production team says they plan on filming in Havana’s historic “10 de Octubre” neighborhood and along the streets of “La Havana Vieja”.

‘Subeme la radio’ is the title of the video clip, the song has not yet released, but it is already charging audiovisual personality in this capital, directed by Alejandro Perez, Cuban director of several video clips with Iglesias and Bueno, together and separately.

This time, Perez, a graduate from the Faculty of Audiovisual Media at the Higher Institute of Art (ISA), called the mythical dance group Guaracheros de Regla and the children of the ‘Paso a paso’ project, directed by Julie Rodriguez, to share some dance moments along with the singers.

The streets in Old Havana next to the Central Railway Station in this capital, was the scene in which Iglesias danced with Cuban dances and took photos with admirers.

We can’t wait to see Iglesias “raise the volume” with what appears to be an energetic music video.

Jeb Bush says he would ‘probably’ close a U.S. embassy in Cuba if elected