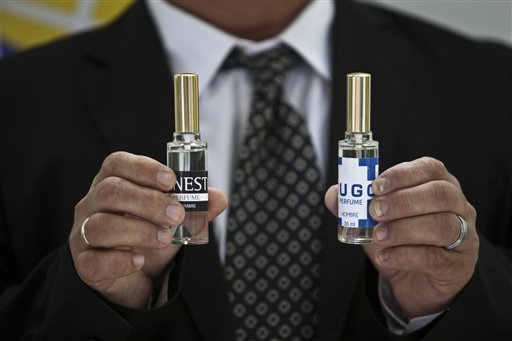 HAVANA, 25 September (AP ANDREA RODRIGUEZ)  Call it “Eau de Revolution” Cuba’s biggest producer of natural products has come up with a pair of colognes for the discerning supporter of international socialism who wants something more than just the iconic “Che” T-shirt.  Formulated by a French company and produced in Cuba, the colognes are being presented this week at a Labiofam convention in Havana.

A woodsy and refreshing citric scent with notes of talcum powder called “Ernesto” honors guerrilla leader Ernesto “Che” Guevara. For those seeking something softer and fruitier, there’s a blend with hints of mango and papaya called “Hugo,” for the late Venezuelan President Hugo Chavez.
“They will be very attractive colognes, but the names also mean a lot to us,” said Isbel Gonzalez, vice president for research and development for Labiofam, which produces homeopathic medicines, cleaning products and dietary supplements. Formulated by a French company and produced in Cuba, the colognes are being presented this week at a Labiofam convention in Havana.
The two scents so far have generic bottles and simple printed labels bearing only their names. But Labiofam is developing more attractive bottles and labels with hopes of putting the colognes on sale in Cuba and internationally, Gonzalez said. She declined to provide a timeline. Labiofam officials said they and French firm Robertet worked for more than 1 1/2 years to produce the colognes.
The Cuban company polled 122 visitors to other pharmaceutical conventions to determine what names people preferred from a pre-selected list of options. “It was a great challenge,” said Cuban biochemist Mario Valdes, who led the scent design team. The French company did not respond to a request for comment. Labiofam is also producing a pair of women’s perfumes called “Amalia” and “Alba.”

While ALBA is the Spanish acronym for the leftist Latin America regional alliance founded by Chavez, Gonzalez did not provide details about whether the perfumes’ names also had political connotations. Celebrity endorsements are a vital part of the perfume and cologne business, but scents inspired by political figures are rarer. One example is that associated with ousted Philippines President Joseph Estrada, a former movie action star and heart throb who was forced out in a 2001 “people power” revolt.
Estrada, now mayor of the Philippines capital of Manila, was known for using a distinctively scented body powder, and at one point during his presidency packages described as Estrada’s body powder were put on sale for his followers. Guevara’s image has long been appropriated for products as diverse as clothing and automobiles, often running into objections from the survivors of the Argentine-born revolutionary who helped Fidel and Raul Castro’s rebels overthrow Cuban President Fulgencio Batista in 1959.
Chavez became the Castros’ greatest ally since the breakup of the Soviet Union, frequently visiting and supplying Cuba with millions of barrels of discounted oil that provided vital support for the island’s struggling economy. Labiofam’s director is a nephew of the Castros, and Valdes said the families of Guevara and Chavez had been consulted and approved the use of the names.
Cubans are enthusiastic consumers of perfumes and colognes. State cosmetics company Suchel-Camacho produces “Alicia,” a scent named for Cuban National Ballet founder Alicia Alonso, which has been popular among both tourists and Cuban women since the 1980s. At the Labiofam convention, visitors’ reactions to the revolutionary scents were largely positive.
“I’d probably be more likely to buy ‘Ernesto’ because the scent is a little more striking,” said Reymundo Miranda, an expert in traditional medicine. Valdes said the colognes had no intention of trivializing the two men’s legacies. “We didn’t want to create propaganda, but rather pay homage to them and help their names endure,” he said. FRANKLIN REYES — AP Photo.