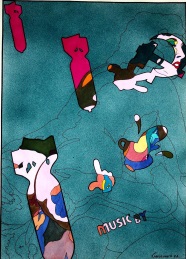 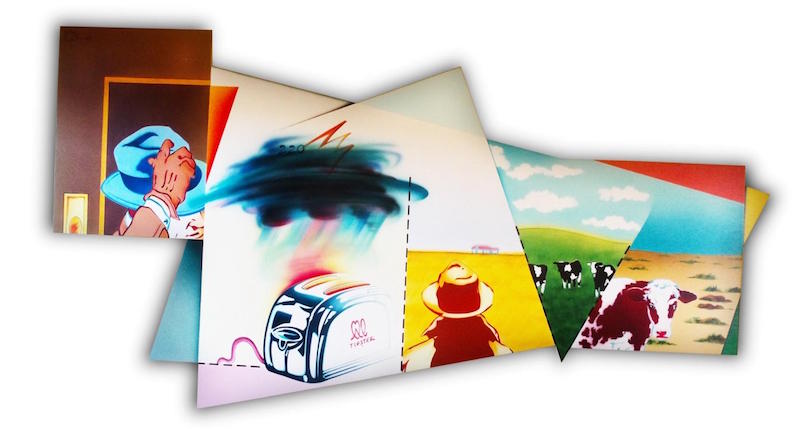 HAVANA, August 7th When Diana Caso and Xerxes Carruana, his heirs, told me about the art of Jorge Carruana Bances (Havana, 1940–Rome, 1997), I was completely unaware of the work of this artist, painter, illustrator, and film animator active in the cartoon department at ICAIC in the early 1960s.

Trained at the San Alejandro Academy of Fine Arts (1954–1957), where he studied painting, graphic design, and illustration, Carruana Bances was one of the artists who participated in the Cuba Colectivamural during the legendary Salón de Mayo in 1967. During those years, with his partner, actress Myriam Acevedo, he led the celebrated “bohemian nights” in the El Gato Tuerto nightclub.

Researchers such as Rosa Marquetti have considered these multidisciplinary shows as the first theater-cabarets or coffee-concerts in Cuba, where they managed to create an environment that was both performative and transgressive, gathering writers, musicians and theater directors—including figures of the stature of Virgilio Piñera and Sergio Vitier, among many others.

It was not until his exile in 1968, when he passed through Barcelona to take up permanent residence in Rome in 1970, that Carruana Bances’s aesthetic approach came to be defined—critical, pictorial, risk-taking, and seeking constant experimentation, a sort of adventure in political-erotic image-making that would engage with late 20th-century visual culture from an unbiased perspective, untethered to any formalist or stylistic ties. 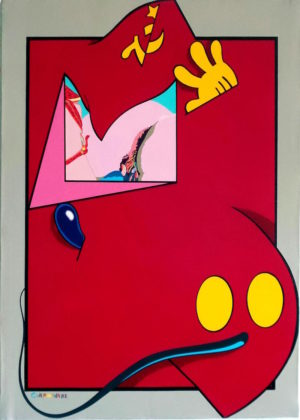 It takes only a quick look at Carruana Bances’s oeuvre to discover the visual and discursive power of his art, seen across multiple series that occupied him for decades, in which certain motifs—erotic, bellicose, pulled from popular culture, the movies, and the comics—appear repeatedly, like obsessions, to determine the poetics of his work.

Only a calm gaze, resting again and again on the pictorial surface, can perceive the complex web of compositions, which contain an analysis that transcends the paintings’ apparent themes and subjects. The artist’s representations reveal a focus on the constructive and narrative nature of the pictorial medium, and especially on the simultaneous modes of condensing diachronic times and heterotopic spaces in a single ground, in an attempt to impart movement and dramatic progression to the work. 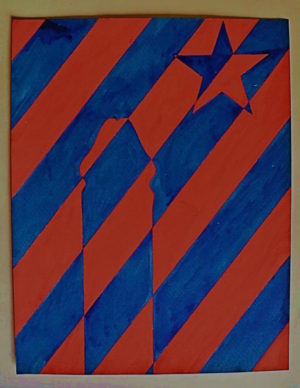 In this, Carruana Bances’s experiences in the animated film industry may contribute to some of his works resembling an exercise in deconstructing the picture plane.

How is it possible that an aesthetic universe like this one has been forgotten, banished from the historiography of contemporary Cuban art, silenced in the recent history of Cuban culture? What are the reasons—other than the fact that most of this work was created in the diaspora, at a historical moment when censorship and invisibility were central to the operations of occlusion and invisibility that ruled the administration of collective memory where culture was concerned, in response to any manifestation of dissent or exile?

If we add this to the content of this image-worldcreated by Carruana Bances, with its explicit centrality of sex and sexuality as discursive axes, as metaphors of political violence from multiple subjectivities, it is possible to understand the disruptive potential of his work regarding the official discourse of the Cuban Revolution.

From the early Psicodélica series (1970), a visual integration of the Pop Art style is evident. The emphasis is clear, not only in the color treatments but in the repertoire of motifs and visual themes drawn from all the paraphernalia of advertising and consumption. There are works in which the penis becomes almost a logo, a national symbol, camouflaging itself between blue and red stripes of a flag. Or it is elevated, with the glans appearing as a mast or an allegorical Phrygian cap. In that sense, one could say that the critical discourse on Carruana Bances’s pictorial research becomes the expression of a kind of sexual politics. 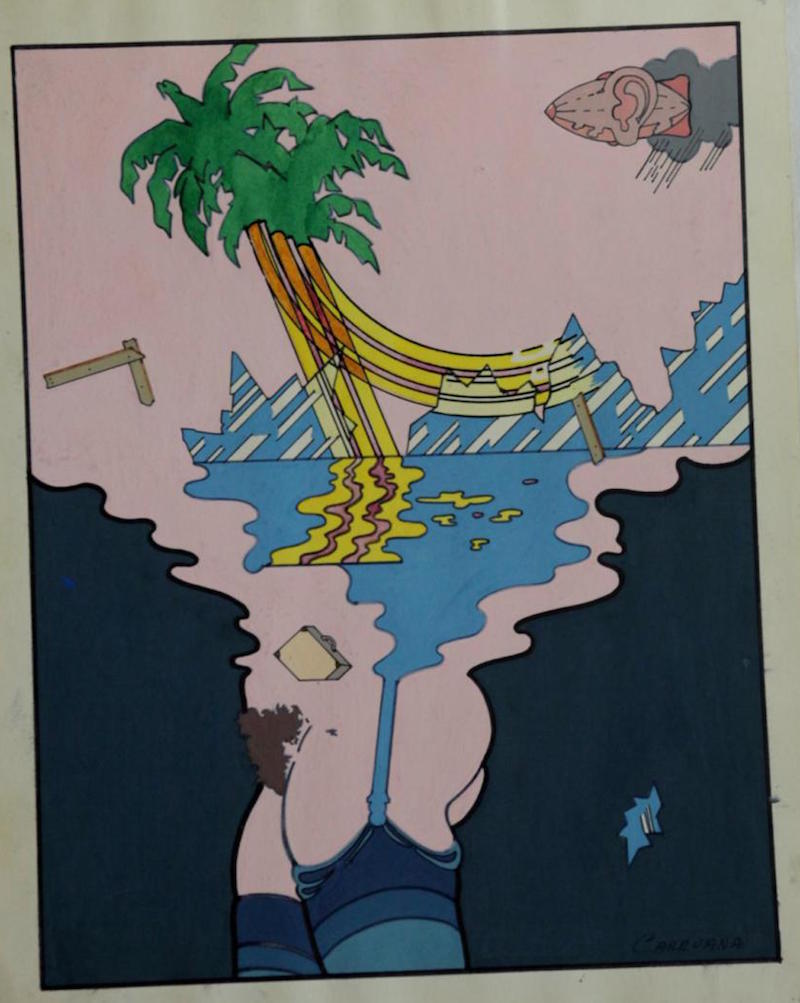 In the late 1970s, his compositions become more complex and abandon the centrality of a scene to be broken down into narrative planes that overlap like a palimpsest, almost cinematic or mnemonic. It is what happens in a set of pieces evoking the ambivalent image of exile as a traumatic and yet liberating experience, undoubtedly reflected in the artist’s own biography.

In consecutive series like Palmas I, II, III (1977) the bodies flee, run away, become fragmented. The iconography refers insistently to travel situations and escapism. The landscape is broken, the horizon is diluted. The suitcases are not big enough to hold the memories. 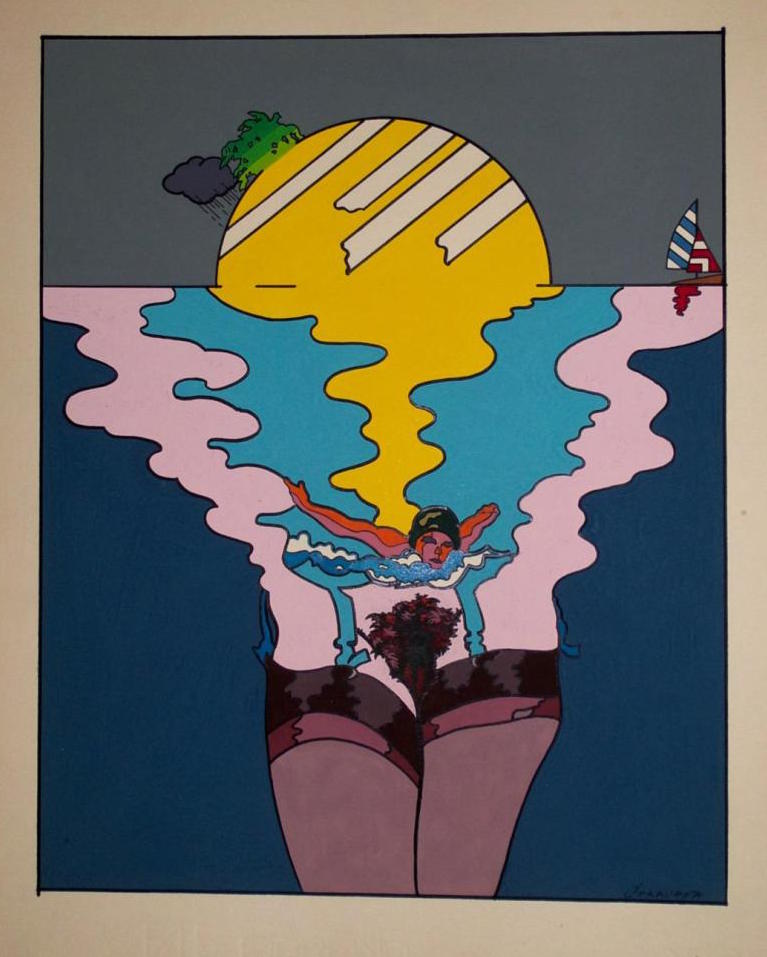 The female figure takes on a greater role in the representation; the vulva becomes a plume of royal palms, a territory, country, home, the final frontier. Sex is revealed as a physical and symbolic evasion. Like the migrant´s memories, the painting is fragmented into a puzzle that is impossible to complete. The story remains interrupted. It becomes irreconcilable.

In short, the image is splintered, time and space in constant struggle within the painting. Perhaps it is in this group of watercolors and acrylics on paper and canvas where Carruana Bances most broadly unfolds his ideas on the divergent and subjective ways of representing the nation. 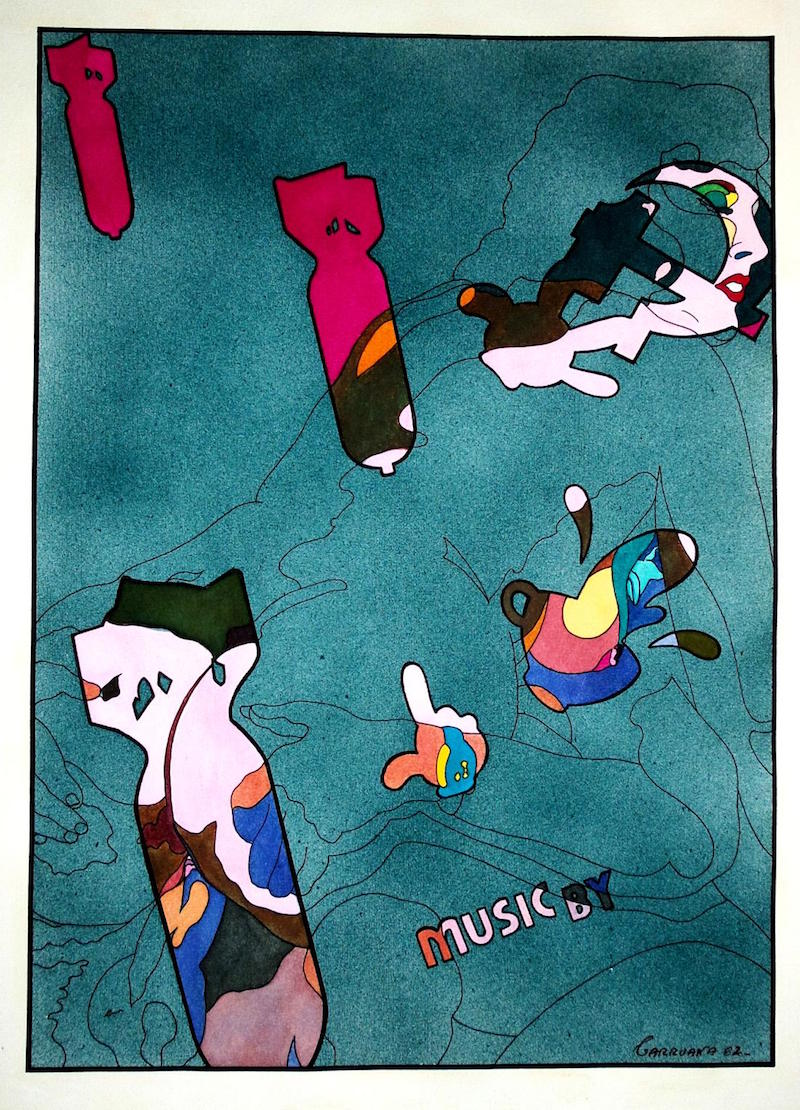 The next decade opens with a series that runs through the late 1980s: Fumetti, sesso, guerra (1981–1987). In this series the artist approaches a hybrid visuality, debating among obsessions, the comics, sex, and war, from which a network of opposites and violence is woven within Carruana Bances’s imagination: female-male, war-peace, capitalism-socialism, figuration-abstraction, sex-religion.

In considering this last pair, it is important to understand its significance in a context like Rome in the 1980s, and the well-known pre-eminence of Catholicism in Italian society. It is something that into the frame itself as a meta-commentary. 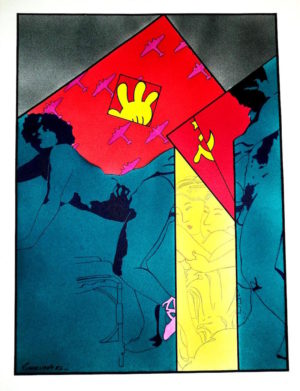 This happens in Uomo giallo “The title could be …” (1989), from the Eroticism series. Indeed, this set of late-1980s works returns to the neuralgic theme of sex in Carruana Bance’s work. The artist covers a wide array of references, ranging from images of Japanese prints Ukiyo-e of the 17th through 19th centuries to the iconic figure of Cicciolina. 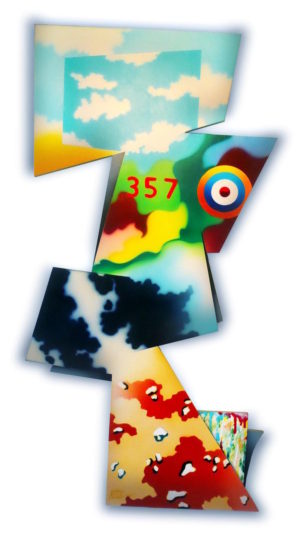 Returning to Fumetti, sesso, guerra, it´s worth mentioning a group of pieces in which Mickey Mouse´s red pants became the Soviet flag, covering the entire composition. Just a fold in the fabric, or a unstitched part, leaves the hammer and sickle uncovered, or makes explicit the allusions to intercourse, masturbation, or oral sex, to which the artfully chubby fingers of Walt Disney’s cartoon charater, in their flashy glove, seem to contribute. It´s no secret that Stalin was fascinated by American cartoons when he discovered them in the early 1930s, so it’s not surprising that Carruana Bances tried to suture together this east-west animated history at the height of the Cold War.

By the 1990s, Carruana Bances consolidated the techniques that he had been groping toward in theFumetti, sesso, guerra series, perfecting his mastery of airbrush painting in acrylics. Legno Distorto (1992–1996) maintains the intensity and strength of color characteristic of his work, but the palette is filled with a light not seen previously in the artist’s work. Something similar happens with the themes, as if the creative will had shifted, from contained tension of his compositions and the implicit violence of their representations to an atmosphere of vital optimism.

The interiors are replaced by the landscape, which is no longer lost or blurred, as in the Palmas series. Instead, it expands throughout the composition, overflowing, as the ground itself. In this regard, it is interesting to note the artist´s intervention in the construction of his paintings—breaking the usual squares or rectangles to create surfaces with irregular edges, which determine the pictorial area occupied by each scene represented. Rooted in his animation work, the artist’s capacity for anecdote re-emerges in these forms, as if each painting were an exuberant movie storyboard.Carruana Bances´s biography, on the other hand, reflects an engagement with political activism along several lines, including environmental awareness, the fight against the death penalty, and the defense of human rights. He even joined the Transnational Radical Party in Italy. It is precisely this ethical position on environmental and eco-sustainability issues that led him to the genre of landscape, and to looking at nature as an object of representation in his later works. The artifacts of war, the machines of violence, the female body, and sex are replaced by windmills, green pastures, and animals 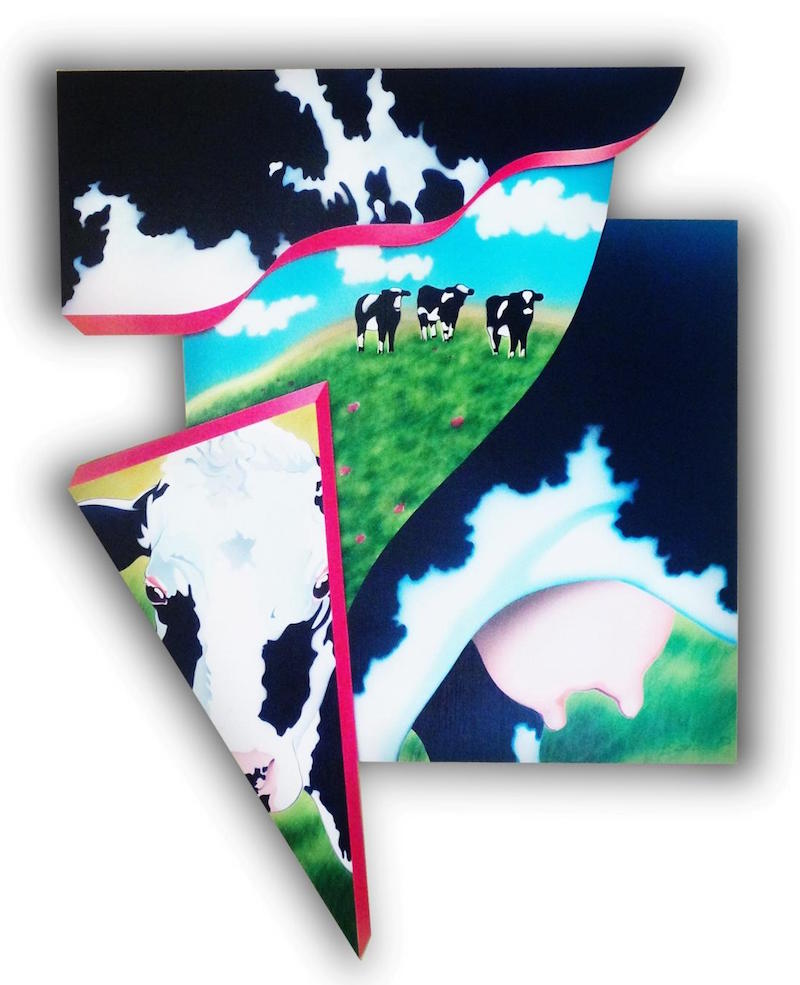 They allude to ethno-traditional cultures and expressions that promote other modes of coexistence with nature, regardless of the progressions of modernity, capitalism, and globalism. In the many transitions across three decades of creative effervescence, Carruana Bances’s art maintained a critical perspective that began in response to the exclusionary accounts of the nation in Cuban political discourse, and developed into a questioning of the impact of modernity and capitalism in contemporary societies. 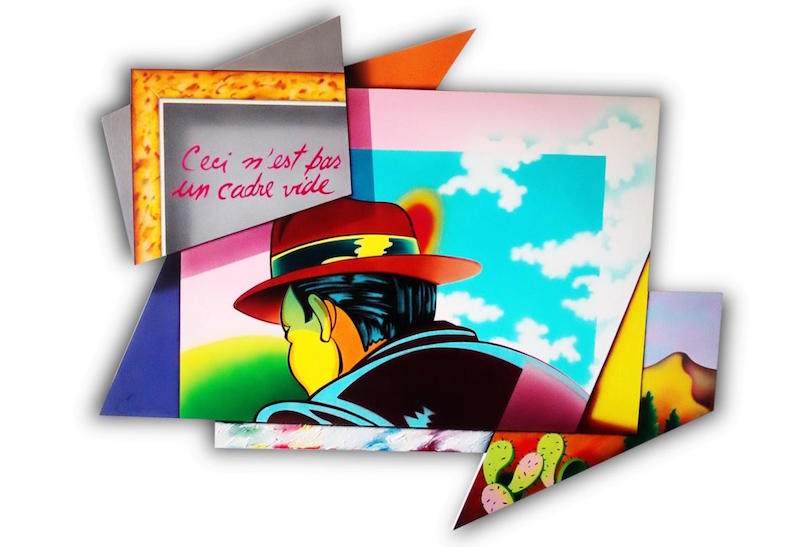 From that oppositional logic, Carruana Bances has bequeathed an artistic biography permeated by a capacity for resistance, a vehement oeuvre of frenetic “nowness,” available for scholarship and ready to assume its rightful place in the history of Cuban contemporary art. Hopefully, the art of Jorge Carruana Bances will have other “blind dates” in the future 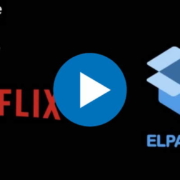