During the opening of the Week, the exhibition ‘As I See Cuba,’ by photographer Dougie Souness, will display several pieces by renowned Cuban filmmaker Roberto Chile, along with an artistic performance at the Centro A+ Espacios Adolescentes in Old Havana.

‘Havana and Glasgow are sister cities and, on this occasion, we intend to honor the solid bond that unites us,’ stated Jeremy Lang, secretary for political affairs, press and projects at the British Embassy in Cuba, speaking at a press conference.

Lang also highlighted the celebration of St. Andrew’s Day (National Day of Scotland) on November 30, which will see a ceilidh – a traditional Scottish social gathering with Gaelic folk music and dance – with a performance of ‘Ceilidh’ by the Otro Lado dance company, directed by choreographer Norge Cedeño, in the El Ciervo Encantado theater.

Likewise, the classic play ‘Macbeth,’ by William Shakespeare, will be performed by the Cuban group Teatro de la Luna, directed by its creator Raul Martin, who stated that this is a Cuban version in three functions.

The British Week’s program will include the presence of the British Council, which will sponsor several community activities by the Cámara Chica and Muraleando projects, where audiovisual materials made by children from Glasgow and Cuba will be screened, respectively.

In addition, the Fábrica de Arte Cubano will host a concert and theoretical sessions of a DJ workshop by British producer Denis Sulta, one of the leading figures of the Glasgow music scene, who will interact with 30 Cuban creators linked to the National Laboratory of Electronic Music and the Hermanos Saiz Association.

Likewise, the Creative Industries Workshop taught by Roy Luxford, director of programming at the Edinburgh International Festival, will facilitate professional exchanges among Cuban artists, promoters and curators around festival management.

In terms of films the Week will feature the Scottish Film Show of the Havana-Glasgow Festival, which will include the unique screening of the film ‘The Angel’s Share’ by renowned director Ken Loach; as well as the classic documentary ‘Nae Pasaran’ by director Felipe Bustos; and the UK drama ‘Trainspotting’ by director Danny Boyle, at Cinema 23 y 12.

As part of the cultural exchange, artists Isla Stout (bagpiper), John Gahagan (violinist and flutist), Frazer McLellan (accordionist) and singer Marianne McGregor will offer several courses on Scottish music and dance to students of the National School of Arts with the participation of dancer Cameron Walker.

The British Culture Week in Havana will consolidate the cultural ties among artists from both countries, with the support of the British Embassy in Havana, the British Council and the Cuban Ministry of Culture. 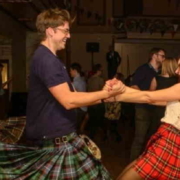 British Culture Week in Cuba, with a Scottish accent

The film ‘Wasp Network’ to premiere in Cuba
Scroll to top