HAVANA, July 30   (AP) – The diplomatic thaw with Cuba has led to a new collaboration with scientists in that country to study the ghost orchid, one of the world’s rarest flowers, U.S. officials said Wednesday.

Ernesto Mujica of Cuba’s Ministry of Science ECOVIDA Research Center has joined researchers from Illinois College and the University of Florida in the Florida Panther National Wildlife Refuge to study ghost orchids, the delicate blooms that star in the book “The Orchid Thief” and the movie “Adaptation.”

Mujica’s participation “would not have been possible without years of persistence and the recent, history-making improvements in U.S. relations with Cuba,” said Tom MacKenzie, a spokesman for the U.S. Fish and Wildlife Service’s southeast region.

The five-decade-plus Cuba trade embargo and travel restrictions to the island inhibited orchid researchers in both countries from sharing data, though a group of Illinois College researchers and students were able to visit Cuba’s Guanahacabibes National Park in 2013.

Mujica waited two years for a U.S. visa to visit Florida before his application was approved this year, MacKenzie said.

This month, Mujica helped document ghost orchids throughout the refuge and is helping implement long-term monitoring methods he uses to study the flowers in Cuba.

“In the future we hope to compare ghost orchid populations in southwest Florida to those in Cuba as a means of better understanding the species’ specific habitat requirements and needs for continued survival,” said Lawrence W. Zettler of Illinois College.

Just a few hundred ghost orchids bloom across the swampy landscape that feeds into Florida’s Everglades. Unique orchid varieties have made the region popular with both enthusiasts and thieves.

Only 11 ghost orchids previously had been catalogued in the panther refuge, but Mujica’s methods helped researchers identify and catalog over 80 new ones, MacKenzie said.

The collaboration shows “how cooperation between our two countries may help at least one rare species in peril,” Zettler said. 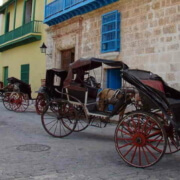 Cuba and U.S. to Discuss Settling Claims on Property

Hillary Clinton to call for lifting Cuba embargo Is Cuban music about to blow up in the US ?
Scroll to top