HAVANA, Jan. 2nd (Reuters) – Priests from Cuba’s Afro-Cuban Santeria religion offered some solace on Thursday to worshippers facing another year of relentless U.S. sanctions, government austerity measures, and shortages in Cuba. In their annual prophesy the priests, known as Babalawos, announced that 2020 would be under the divinity of one of Santeria’s most powerful and protective deities, Oshun, the goddess of beauty, purity, fertility, love, and sensuality.

The ritual-filled religion, which fuses Catholicism with ancient African beliefs brought to Cuba by slaves, is practiced by millions of Cubans, many of whom eagerly await guidance from its annual forecast.

Washington is threatening more sanctions this year and Cuban authorities have warned austerity measures will stay in place and economic growth will be meager, at best.

“Cuba is going to escape any attempt to crush us,” Babalawo Víctor Betancourt, who presided over the commission that formulated this year prophesies, told Reuters.

“Oshun is a promising sign in that regard and we Babalawos use these sign-in adverse circumstances,” he said.

The Letter of the Year warned against increased crime and epidemics and the disintegration of the “traditional Cuban family due to promiscuity, lack of authority and loss of values”, among other threats.

The Santeria priests recommended tolerance, patience, good behavior in general, as well as avoiding too much pork or breeding pigs in inadequate spaces.

“Corruption must be buried in Cuba,” Betancourt said, referring to crime and vulgar and loud behavior among the youth and drugs.

Babalawo Enrique Machin, a commission member, told Reuters U.S. President Donald Trump might not be re-elected, stressing the need for patience and dialogue.

“Every country in the world has to talk. The predictions with the United States is that the enemy will always be present,” Machin said.

“That is why we are calling for social dialogue, for a political, economic dialogue, everything that can be done.”

Santeria followers have believed their gods were on the side of the Cuban revolution ever since a white dove landed on the shoulder of late revolutionary leader Fidel Castro during a victory speech in Havana. 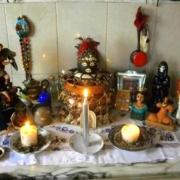 TWO SPANISH DISAPPEARED IN CUBA WERE “KIDNAPPED” BY A SANTERA

Award granted to Viengsay Valdes and two other dance personalities