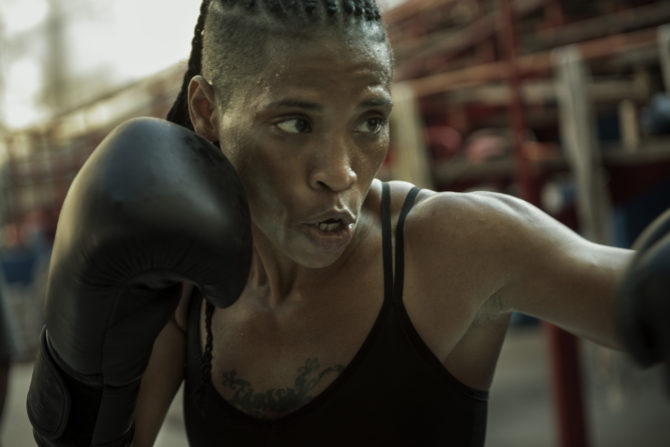 HAVANA, August 23th After more than seven years of tireless fighting and training, of never being knocked out by dejection, Namibia Flores, the most qualified woman boxer in Cuba, will not enter the ring to fight for her biggest dream.

Born in Matanzas province and brought up in Havana, it is too late for the flyweight boxer to fight in the Olympics. In Cuba, women are still banned from taking part in international boxing competitions.

“I’m 40 years old. In this sport that’s old. It’s the age limit for the Olympics,” said Namibia after her five-kilometre morning run, while she prepares for her daily training session at the Rafael Trejo boxing gym in Havana Vieja.

The place needs repairs. The leather bags are heavily cracked, and the majority of the gloves can’t take any more rounds. The mirror has lost part of its shine and in some areas it no longer reflects the boxers’ images.

On the ring’s old canvas Namibia seems to be dancing with her sparring partner Maikel. She throws jabs, straights and hooks while holding Maikel back so that he cannot counterattack. Her three training partners watch her closely. They would like to have Namibia’s resistance and punch.

She trains every day from ten in the morning until two in the afternoon. She almost always goes to the gym in Havana Vieja, but sometimes she goes to a vale todo (anything goes) gym in the Víbora neighbourhood, close to Córdova Park, where they practice mixed martial arts.

“There’s got to be sport in Namibia’s life every day, even if I’m ill,” she said. 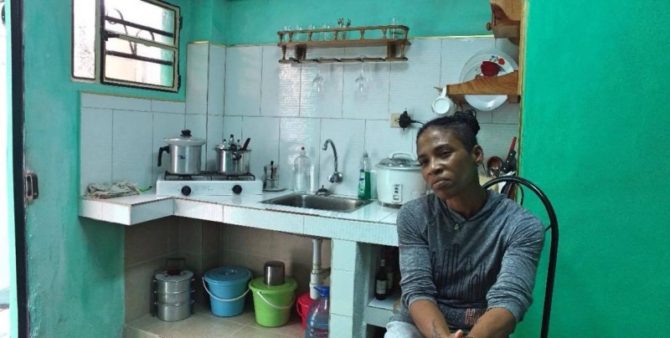 Before training she just drinks a coffee and takes her vitamins. After she drinks an ice-cold pru oriental, a frothy Haitian drink made by fermenting different plant roots.

Namibia eats whatever is available and what she can buy in the market, but tries by any means possible to eat vegetables and proteins.

For two months she trained with a male boxing team in Indonesia, where she managed to beat one of its members. She has been fighting men fearlessly for 25 years after a bout with a boy.

“They constantly harassed my brother, who was smaller than me then. I went out to defend him and I ended up with a swollen eye,” laughed Namibia.

The next day she started to practice a combat sport to learn how to fight, although so far she has not needed to use it to dodge another punch. She chose taekwondo, training for nine years and reaching black belt 1st Dan. She gave Havana province its first bronze medal for the sport in the provincial games. Then she started to work as a trainer, but she gave up the martial art because it bored her.

At the beginning boxing was just a hobby, a way of channelling her negative energy.

Love for the gloves came later, motivated by the esteem of her trainer Nardo Mestre. He discovered her knack for boxing and he encouraged her to prepare for the day in which women could officially measure up against each other with their gloves on. He put the idea of an Olympic medal into her head and she has not stopped training since.

Also, the intense physical training made her optimistic and fed her vanity. Namibia has always enjoyed hearing that she looks young for her age. 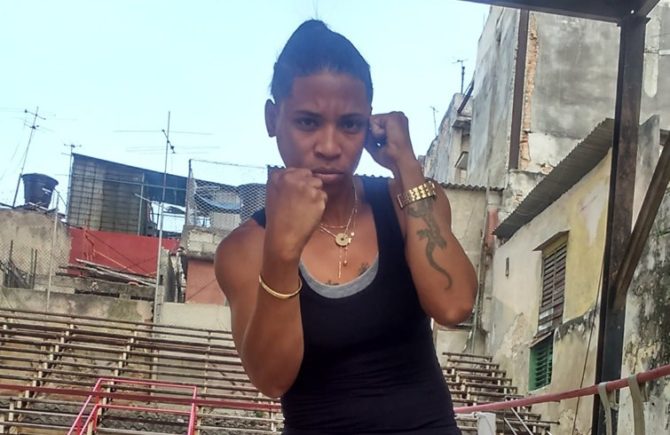 But she does not understand why the Federation of Cuban Women (FMC), which was created in 1960 with the objective of “achieving full equality for woman in all areas and levels of society,” has not supported women’s inclusion in boxing.

Vilma Espín, the deceased wife of President Raúl Castro headed the FMC until her death and María Yolanda Ferrer has been the General Secretary for two decades; neither ever took a stance on lifting the ban on women in boxing.

The silence and lack of support demonstrates the Federation’s refusal to recognise female boxing in international competitions, a posture that serves to strengthen sexist ideas on the issue.

It is even more difficult to understand the FMC’s silence when almost all combat sports, such as taekwondo, wrestling, karate and judo have female competitors who achieve outstanding results.

In judo, for example, Cuba has Olympic and world championship medallists such as Amarilis Savón, Yurisleidy Lupetey and Driulis González. González, with four Olympic medals and seven world medals, is considered to be a judo legend and the best judoist of the Americas in the 20th century.

After so many sacrifices without tangible results, Namibia has two options left and neither has yet come to fruition. One option is professional boxing but this could mean moving to a different country, and it is not always easy to find a promoter.

“When I went to the United States I could have stayed, and now I could be knocked out or earning money, as we say,” Namibia explained. “But that wasn’t what I wanted. I don’t want to live outside of Cuba. But the formula that we have created to be able to fight and also live in Cuba doesn’t work either because there’s no money in it.” 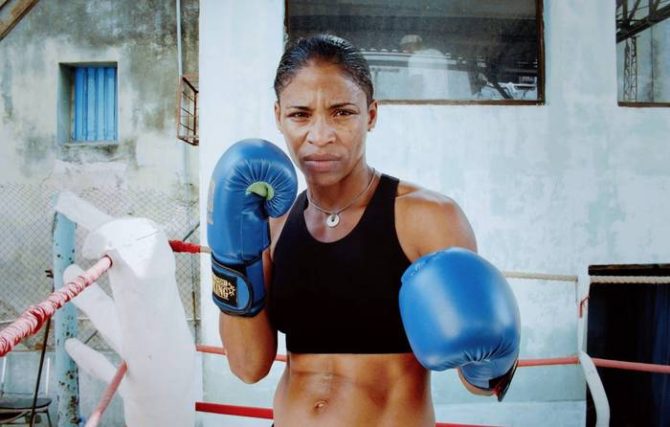 Namibia has gone to the US on two occasions. First in March 2015 to attend the presentation of Boxeadora, a documentary about her life produced by the North American Meg Smaker. The second time was in July of the same year to try and finalise a contract where she could train in Havana and travel to Miami a few weeks before each fight.

She still thinks it is possible, with the help of some friends, to sign a contract in Europe to take part in professional female boxing before age beats her for a second time.

Namibia’s second option, which she believes has potential, is to become a trainer for young boxers in Cuba. If female boxing is officially approved, Namibia, who also has a degree in physical education, could train female boxers or give private personal defence classes. If all else fails, she could fall back on her cooking skills.

“I don’t have work at the moment, but I’m also a good cook,” she said. “I’ve cooked for paladares [small private restaurants].”

Her trainer, Mestre, believes that Namibia is physically and mentally capable of teaching new boxers.

“She has the fortitude and the willpower. She’s been training for years for nothing. Imagine what she could achieve if she could at least train others officially.”

Mestre believes that female boxing will be approved in Cuba soon.

Although so far Cuban women have not been allowed to access training programs or to choose boxing in sport schools, this reality could change shortly.

The president of the Cuban Boxing Federation, Alberto Puig de la Barca, told ESPN in April 2015 that “we are still considering female boxing. We are looking at the pros and cons.  It’s a subject that is being evaluated; there hasn’t been a decision. We’ll see over the coming years what decision we make.

“For the moment, the Federation does not approve female boxing, at least not in the competitive system. But we know that women are practicing this sport. Here sport is everyone’s right”.

According to reports in the official media, such as the newspaper Vanguardia, at the beginning of March the National Commission suggested teaching women interested in boxing because the World Boxing Confederation had approved women’s participation in the Seventh Word Series of Boxing, to be held in 2017.

The Cuban sporting authorities have not made an official statement on the subject and the FMC still has not issued any declarations.

But female boxing fans and the general public are used to all kinds of changes being experienced first on a small scale and with limited publicity, and this seems to be the case for women’s official entry into boxing.

Namibia has complete confidence that female boxing will be approved as an official sport, as well as total assurance that she will continue training until she dies.

“I’m going to be the super boxing grandmother. I’m going to carry on boxing as long as I can throw a punch on the bag,” she said jokingly. “I think that they’ll bury me in a punching bag instead of a coffin.” 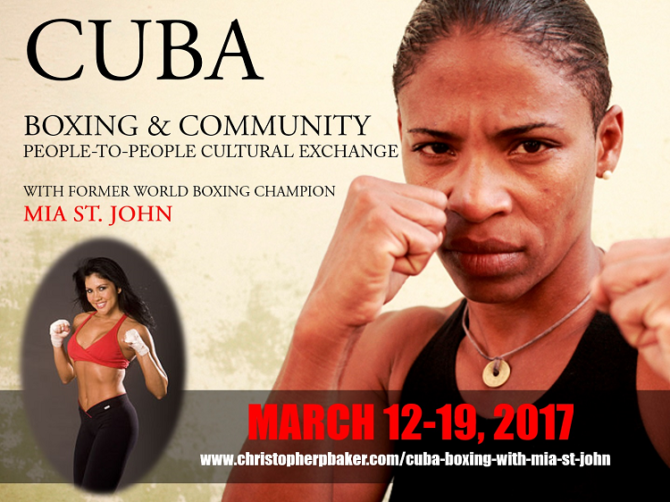