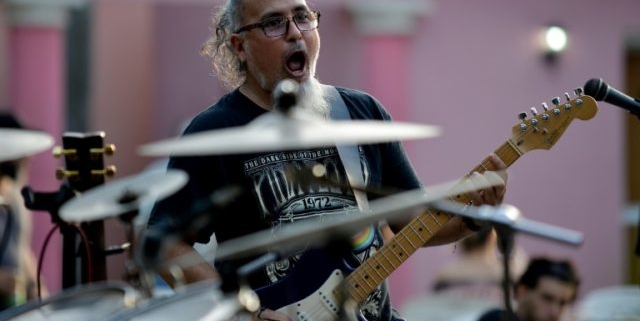 HAVANA, July 12th  (AFP) For decades, their songs were banned, and even called the “music of the enemy.” But Cuba’s rockers have finally found their place in a nation where salsa, rumba, and reggaeton usually reign.

This year, Havana will celebrate the International Day of Rock and Roll – which falls on Saturday (Jul 13) – with three days of concerts.

Each day, 13 groups will take the stage at Maxim Rock, the club that also serves as the home of the government-sanctioned Cuban Rock Agency, for a 10-hour marathon.

It will be a far cry from the many years when the classic rocker look -long hair, tight jeans, and leather bracelets – was at odds with the “new man” image, hard-working and serious, vaunted by the authorities during Fidel Castro’s revolution.

Despite the obvious difficulties, most of Cuba’s rockers chose to remain at home and dedicate themselves to their music, rather than opt for exile or the struggles of dissident life.

Nowadays, some have lost their hair while others can no longer squeeze into those tight jeans, but they’re still performing regular gigs in Havana.

Roberto Diaz, a 48-year-old with a graying goatee who will begin a European tour next month with his group Animas Mundi, was one of the musicians who tried to keep rock alive in Cuba in the late 1980s.

“I was one of those youngsters who would get stopped in the street all the time, getting asked for my ID documents or being taken down to the police station if I was walking around with my guitar or keyboard,” said Diaz.

“It was tough – it wasn’t like it is today,” said Virgilio Torres, a 62-year-old singer with Vieja Escuela (“Old School”). 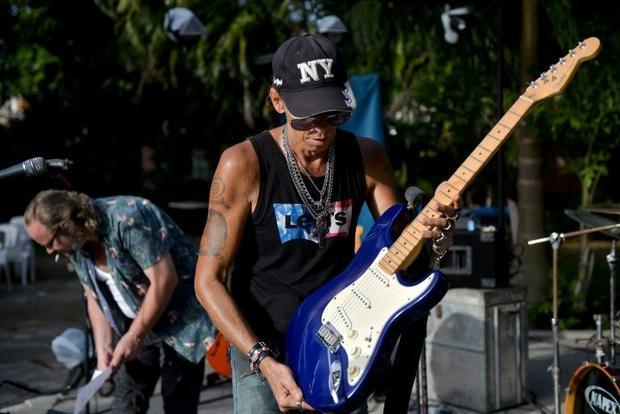 Cuban rock band Vieja Escuela (Old School) is seen here performing in Havana — a concert that was once unthinkable during the height of Fidel Castro’s revolution (Photo: AFP/YAMIL LAGE)

Rock came to Cuba from the United States in 1955, four years before the revolution.

A political confrontation between the communist-ruled island nation and Washington soon followed – most notably in the form of the US economic embargo in place since the early 1960s.

Rock music was banned from television and radio airwaves from the 1960s to the 1980s before slowly benefitting from a decade of increasing tolerance.

During the ban, rock “was sometimes viewed as ideological corruption,” said Torres.

“It was the enemy’s music because we sang in English, which created confusion.

“Later, (authorities) realized it wasn’t, many years later, but they’d already deprived many musicians of their instruments, leaving them with nothing.”

The island’s rockers needed to come up with ingenious ways to keep playing.

“We made guitar strings with telephone wires, used telephone handsets to fashion adapted microphones, we created speakers from wood,” said Aramis Hernandez, 62, a drummer and leader of the band Challenger.

In 1990, the Soviet Union crumbled, Cuba lost its main financial backer – and the island suffered its worst economic crisis.

At that time, rock music began to spread its wings.

There, Cuba’s first professional rock groups started performing and change was in the air.

Castro himself unveiled a statue of John Lennon in 2000, and El Submarino Amarillo, a rock bar that pays tribute to the eponymous Beatles album and film, “The Yellow Submarine,” opened its doors.

Several state-run cultural centers began to include rock – once seen as subversive – on their programs.

That was a step in the right direction, “but there’s still a lot to do,” said Hernandez.

“Access to television and radio programs has improved, but we’re still only at the beginning.”

Steinar Seland, a 50-year-old Norwegian who arrived in Cuba in the 1990s, is the leader of Vieja Escuela.

When he came to the island, rock “was still a marginal phenomenon, and it remains a bit that way,” Seland explains.

“But then again, we’re on the island of salsa, aren’t we?” he added.

Cuban rock diehards say they are ready to make up for a lost time.

“There are fans who’ve started to come back,” said Torres, explaining the phenomenon of the “tembas” (oldies), who are driven by nostalgia and happiness to be able to listen openly.

“They were kids who were hippies or rock enthusiasts and now they’re architects, doctors … perfectly integrated into society.”

Even if the audience is still relatively small, “it makes us happy” to play without fear, said Torres.