HAVANA, June 28th  Electric power in Cuba is known for jumping from one crisis to another.

It has only been a month since supply issues in May led to the suspension of work in non-essential businesses and now the Electrical Co. is warning that the Cubans will face four-hour daily blackouts.

“As reported on Saturday, June 19th, the technological limitations in the thermal generation blocks, together with the units that need maintenance, led to the recent breakdowns, and the fuel limitations for the generator groups also affected electricity service,” the state company said on June 23.

The different provincial delegations of the electricity company communicate daily the blackout zones and schedules in an impossible attempt to calm the population, which trembles at the possibility that the situation will continue during the excessively hot months of July and August, when, especially at certain times, it can be unbearable to live without a fan or air conditioner.

The fears are not unfounded. Lazaro Guerra Hernandez, technical director of the Electricity Company, said on television that “in the summer months, basically in August,” there could be better conditions to “cover the demand and minimize the effects on the electricity service.”

The engineer said the problems are caused by the limitations in the generating capacity of the thermal plants and engines that run on fuel, the Island’s major sources of energy.

“Five blocks have been designated to organize the service so as to, in some way, guarantee that each circuit is not affected for more than four hours,” he apologized.

The Electric Company assures that it is working “nonstop” to solve the breakdowns and apologizes for the inconvenience. However, this hasn’t appeased Cubans, who complain about a service that has become more expensive in recent times and whose quality is far from the minimum requirements.

At the beginning of the year, with the start of the Ordering Task* electricity rates shot up. Soon after they were lowered a little because of the widespread public discontent. The rates, in any case, have remained high for the majority of Cubans, even more so considering the frequent deficiencies of the services.

The National Office for the Control of the Rational Use of Energy has been urging for almost two years to reduce consumption with the “Save Now” campaign, but the pandemic and prolonged stays at home have frequently prevented meeting the objectives. In any case, the majority of consumption comes from industries and not from small domestic consumers.

The lack of fuel, which arrives in smaller quantities from Venezuela despite constant shipments, is affecting electricity generation. Additionally, the plan to replace generation based on fuel with green energy is slow, even more so than in many other countries. Citizens have little opportunity to manage their own consumption with solar panels, due to the difficulties in importing them, and wind farms are a long-term strategy.

The Government intends to change its energy matrix by 2030 with the intention that 24% of the island’s energy (around 2,300 megawatts) will come from renewable sources, mainly from bioelectric plants and solar parks. Meanwhile, Cubans continue to live with the blackouts. (14ymedio) 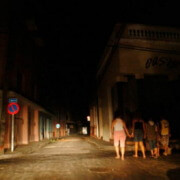