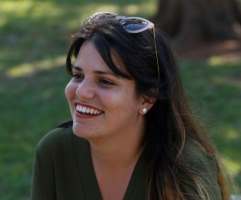 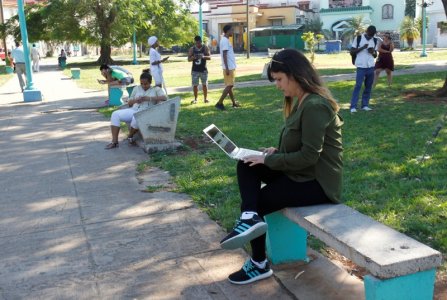 Elaine Diaz, who founded web-based outlet Periodismo de Barrio in 2015, connects to the internet at a hotspot at a park, in Havana, Cuba February 5, 2018. REUTERS/Stringer

HAVANA, Feb. 7th  (Reuters) – Leading Cuban independent media said they want nothing to do with a Trump administration initiative to foster more such outlets in Cuba , contending it interferes in Cuba’s politics and creates the impression they are U.S. mouthpieces.

Elaine Diaz, who founded web-based outlet Periodismo de Barrio in 2015, connects to the internet at a hotspot at a park, in Havana, Cuba February 5, 2018. REUTERS/Stringer
The U.S. State Department last month announced the creation of a Cuba Internet Task Force to look at “opportunities for expanding internet access and independent media” in the Caribbean country. It convenes for the first time on Wednesday.

The initiative has come under fire in Cuba both from the government, which has branded it subversive, as well as from the very organizations it is supposed to help.

“We are not just talking about something that heightens tension in the country’s political situation but a move that could also damage the credibility of the independent media,” said Elaine Díaz, 32, who in 2015 founded Periodismo de Barrio which focuses on the environment.

Cuban millennials like Díaz have created a handful of web-based news outlets in recent years in Cuba in the wake of the expansion of internet and broader social and economic freedoms.

While privately owned mass media are forbidden by the Cuban constitution, these new outlets have been tolerated as long as they are not “counter-revolutionary,” a nebulous term used against those the government accuses of trying to undermine it.

Slowly, such independent media have been chipping away at a half-century state monopoly, offering independent reporting and winning prestigious journalism prizes along the way.

However, pro-government bloggers started attacking these new outlets immediately after the State Department’s announcement, as if it were proof they were the product of U.S. policy.
“They are damaging us by giving arguments to these people … who are trying to link us to the enemy to minimize our presence in Cuban society,” said José Jasán Nieves, 30, director of El Toque, an online platform that focuses on entrepreneurship and citizenship.

U.S. President Donald Trump’s moves to roll back the normalization of relations were having the opposite effect, Nieves said.
“Trump’s policy is aimed at destruction: toppling the Cuban government,” said Miguel Alejandro Hayes, 22, who writes for the outlet La Joven Cuba, which published an open letter of complaint to the State Department. “We don’t agree with that”.

Cuba blocks web access to what it considers dissident media, such as the country’s most famous blogger Yoani Sanchez, as well as stridently anti-Castro, Miami-based outlets.

So far, however, it has not blocked the new outlets that are sometimes highly critical of government policy and Cuban hardships but do not call for an end to Cuba’s socialist project.

Their editors, who face obstacles like restricted internet access and occasional detentions, hope that will not change now.

Díaz said that her outlet would refuse any money that the Trump program might award. In Cuba, people who receive aid from the U.S. government are branded mercenaries.

“These media are called independent,” said Díaz, “and that means independent of Cuban authorities as well as any other government.”