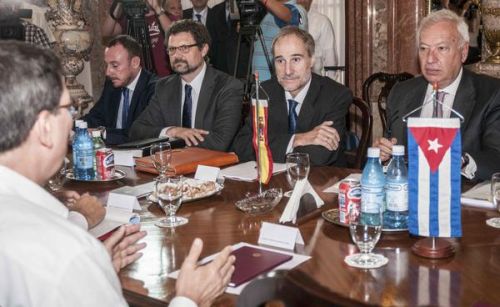 HAVANA, May 16th  Cuban foreign minister Bruno Rodriguez will meet on Monday with his Spanish counterpart Jose Manuel García-Margallo, who is paying his second official visit to Cuba.

The Spanish foreign affairs and cooperation minister, who arrived Friday in Havana after visiting Ecuador, is also scheduled to meet with Cuban government vice-president Ricardo Cabrisas as part of his agenda, which concludes on Monday.

The top government Spanish official´s visit here aims at boosting bilateral links between Madrid and Havana and addressing his country´s 28-year cooperation with Cuba along with the role and operations of Spanish companies accredited on the island.

The Spanish diplomat reportedly intends to address with Cuban authorities how to use some 375 million Euros, a portion of the debt condoned by Spain to Cuba, to fund local agricultural production.

Foreign minister Margallo previously visited Cuba in 2014 to consider prospects for bilateral relations, particularly trade and other issues related to the international agenda and the challenges posed by the global economic crisis.(acn)