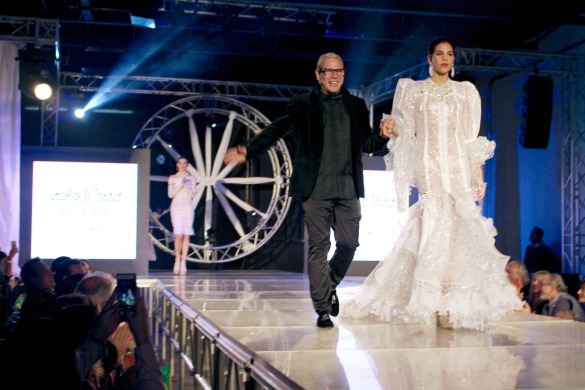 Caridad is an haute couture designer from Vedado in Havana Cuba and made his U.S. debut on Friday during Latino Fashion Week.

HAVANA, Feb. 25th Ismael de la Caridad started his fashion career in modeling at 15. By the time he was 18 he made a shift behind the scenes and tried his hand at stitching and designing, a trade he learned from his mother.

When the opportunity to dress Rosita Fornes – the Cuban Beyoncé of his time – came up, he didn’t hesitate to take on the challenge; a move that would essentially catapult him into a fashion career with a span of more than 30 years.

Caridad is an haute couture designer from Vedado in Havana Cuba and made his U.S. debut on Friday during Latino Fashion Week.

During the last two months, he created a complete collection of 40 dresses with a pre-selection of 25 all stitched by hand. He said it happened in record time and he relied on past colleagues from all over the island to make it happen.

“I’m bringing traditional Cuban inspired dresses and re-imagining them for modern times. It has very authentic styles of stitching created in Cuba. For a long time I’ve been rescuing and archiving traditional sewing techniques from Cuba and including them in my collections.
I’ve traveled to Matanzas, Santa Clara, Cienfuegos, Trinidad and all over the island to find them, and this collection is a display of all of those techniques,” Caridad said.

The designer prefers to be involved in the whole process of giving care to small details, like curating his own playlist for the show and singing in the beginning and the end of the opening songs. He also helps with hair and makeup of the models.  Recently he traveled to Mexico to obtain special feathers he could not find in Cuba for a dress entitled Peacock Woman.

Caridad is continuing his U.S. tour in other cities but said this event has been the most important in his career now.

“This was a commitment and a responsibility I could not afford to take lightly. I was so honored that I was invited to participate in this event. It’s like a new career started for me. It’s been highly accepted in Cuba and I hope the American audience loves it as well. ”
http://www.miami.com/cuban-designer-showcases-pieces-latino-fashion-week-article