“Many people in Cuba save their vacations to attend the film festival,” she said. “I will try to attend movie theaters as much as possible, but I will be very cautious because of the virus.”

The festival will screen more than 90 films from about 20 countries, including Argentina, Brazil and Colombia in the first part of the event, from Dec. 3 to 13, festival president Ivan Giroud told a press conference on Thursday.

The much-anticipated festival, which is annually joined by foreign visitors and 300,000 moviegoers, will take place on a small scale this time, and will be held under strict anti-pandemic protocols, Giroud said.

Stressing the irreplaceability of cinema-going against the backdrop of rising digitalization and the new challenge of the COVID-19 crisis, Giroud said, “We are open to the digital world, but the social and cultural experience of watching a film at cinemas cannot be replaced.”

To minimize the risk of COVID-19 contagion during movie premieres at the oldest film festival in Latin America, strict safety measures will be put into place. For example, audiences will be asked to wear face masks, observe social distancing and provided with disinfectant solutions before film screenings.

Yumey Besu, director of the event, said that movie theaters will operate at less than 30 percent capacity, and steps have been taken to avoid long lines and massive gatherings.

“We have enhanced measures so there is enough time to properly disinfect auditoriums between screenings,” he said. “To protect people’s health is our paramount priority.”

Cuba reopened movie theatres in early October after they had been closed to the public in March when the pandemic started to wreak havoc in the Caribbean nation.

Every day, more than 3,200 seats will be at the disposal of moviegoers in the country’s capital as Cuban state TV broadcasts some films screened at the festival.

Luciano Castillo, a movie critic and senior media expert on the island, told Xinhua that Cubans are really enthusiastic about films and it could be a good opportunity for them to get rid of stress provoked by the virus.

“It offers a possibility to rediscover cinema from a different perspective,” he said, adding that he strongly believes in the importance of film festivals where audiences visit movie theatres in masses.

The 42nd edition of Havana film festival will return with the movie contest as the second part from March 11 to 21 next year given the current epidemiological situation worldwide. 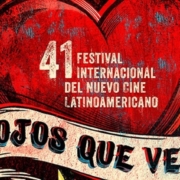 Air traffic increases in Cuba with reopening of airports

The Return of “Mules” to Cuba’s Airports
Scroll to top