Cuba, which restored full diplomatic relations with Washington last week, was removed from the US blacklist because of improvements in Havana’s response to and investigations of sex trafficking, said Sarah Sewall, under secretary of state for human rights.

The 2015 Trafficking in Persons report raises Cuba to its Tier 2 Watch List, along with about 40 other countries, citing its “sustained law enforcement efforts” in prosecuting and convicting sex traffickers.

The State Department had ranked the communist-ruled island in its Tier 3 category for the worst offenders since 2003.

Sewall said that the upgrade did not mean Cuba was free of human trafficking, however, adding that Washington remains concerned that Havana does not regard forced labor as a problem.

She said the issue would be discussed in upcoming human rights talks between the United States and Cuba.

The State Department had previously removed Cuba from its list of state sponsors of terrorism, clearing the way for last week’s reopening of embassies in each other’s capitals.

US Secretary of State John Kerry is scheduled to travel to Havana next month to formally raise the US flag over the American embassy there, after a rupture that lasted more than a half-century.
https://uk.news.yahoo.com/us-gives-cuba-upgrade-human-trafficking-report-163827013.html#rcipHwr 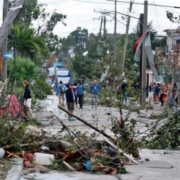