HAVANA, May 22nd  The State Department’s announcement on May 16 under the heading “Measures by the Biden administration to support the Cuban people” have favorably surprised most observers who closely follow U.S. policy towards Cuba.

However, when the context and background is analyzed and the four packages of regulations are examined in more detail, they turn out to be neither so unpredictable nor much less so significant.

More details, fewer details, essentially they constitute a first step, quite restrictive, aimed at fulfilling what the current president had promised to do during the bellicose 2020 electoral campaign in which he had faced who he considered his number one political enemy, Donald Trump The latter, let us remember, had attacked wickedly and viciously, directed equally against the Obama-Biden administration and against the Cuban people and government, to “cancel” (according to his own words) that transcendental joint diplomatic achievement that was the beginning, in December 2014, of a process of normalization of relations between the two asymmetric neighbors.

What should be a surprise and be censored is that for 16 months the Democrat refused to fulfill what he promised in 2020, citing all kinds of excuses, each one less credible than the other: Cuba is not a priority, and the policy is being reviewed.

Those phrases hid a reality as crude as it lacked political ethics. As is known in Washington and Miami, the Democratic senator of Cuban origin, Bob Menéndez, was flatly opposed to any step that would mean a return to Obama’s policy, towards which he always expressed the same rejection as his Republican counterpart, Marco Blond.

And Menéndez has two important assets in his favor: he is chairman of the Senate Foreign Relations Committee and his vote is essential for Biden in an upper house divided exactly in half. He used those levers without any restraint and the administration folded, in behavior that showed little courage and political lucidity.

In short, given the peculiarities of the U.S. political system, two presidents (Trump in 2017-2021; Biden in 2021-2022) delegated foreign policy toward a neighboring country to a Senator (Rubio under Trump; Menéndez under Biden) and allowed that it be made based on the individual interests of both politicians.

The preferences of hundreds of thousands of U.S. and Cuban-American citizens were thus unscrupulously ignored.

But to the point. What motivated this move that seems suddenly full of realism?

The key may be in the first sentence of the “Fact Sheet” published by the U.S. State Department, which states: “Today, the United States is taking a series of measures to increase support for the Cuban people in line with our national security interests.”

Along with the hypocritical phrase that the measures are aimed at “increasing support for the Cuban people,” the expression “in line with our national security interests” now appears. 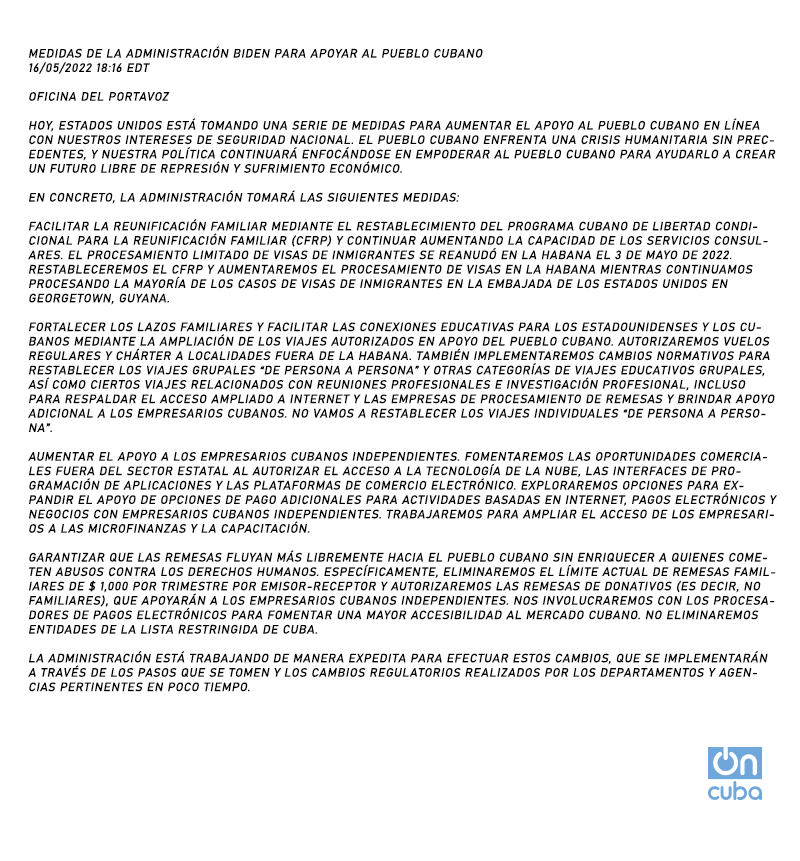 As on previous occasions, a migration crisis has once again raised in Washington the need for diplomatic exchanges at the highest level with Havana, and this happened on April 21, as I wrote here a little over two weeks ago.

But the diplomatic environment has become even more complicated for the United States with the conflict that has arisen between Biden and his hemispheric counterparts over the exclusions from the Summit of the Americas, to be held in Los Angeles in early June.

As is known, the White House has proposed to hold the conclave without the presence of Cuba, Nicaragua and Venezuela, which is opposed by several presidents of the region, first of all, of Mexico, Andrés Manuel López Obrador, who has said that if all are not present, he would not attend.

Once again the U.S. claim to diplomatically isolate Cuba (and, in this case, Nicaragua and Venezuela as well) collides with realpolitik. Once again, reality destroys the illusions that the policy toward Cuba passes exclusively through the interests of Cuban-American politicians in Miami.

It cannot be said that the issues covered by the four packages of measures are insignificant. Some are aimed at responding to demands that originate above all among Cuban-American voters, such as the reestablishment of the family reunification program and the elimination of the limit of 1,000 dollars per quarter on remittances from these to their relatives in Cuba.

But there are two that stimulate purely Cuban sectors: the authorization of Americans’ trips called “people to people” (not tourist) to Cuba, which in 2014-2016 stimulated the Cuban accommodation, hotel and gastronomic services sector; and facilities for certain investments in the Cuban private sector, precisely when the island’s authorities are promoting it.

The Cuban government has rightly seen it as a limited step but in the right direction. But perhaps the one who has qualified it best is Democratic Senator from Vermont, Patrick Leahy, who has called it timid, but welcome.

As has always happened in the past, the measures leave many questions unanswered, such as, for example, how the sending of remittances will be resolved if the number of Cuban financial institutions that are on the State Department’s famous blacklists is taken into account; or when will the normal operation of the Consular Section of the Embassy in Havana be regularized, which would allow Cubans to do what citizens of other countries ordinarily do, even with enormous obstacles: apply for a visa directly at the U.S. representation closest to them, the one in their country.

These regulations do not essentially modify the unilateral coercive measures that have weighed on the island for more than 60 years. On the other hand, they do not even refer to two of the most arbitrary measures that Donald Trump took: to include Cuba again for no reason at all in the “list of state sponsors of terrorism”; and activate Title III of the Helms-Burton Act that every president before him had refused to do.

What is obvious, judging by the final sentence of the “Fact Sheet” issued by the Office of the State Department Spokesperson, is that the administration wants to work in an “expedited” manner and that it is hoped that the new regulations will be drawn up in a short period of time.

It reads thus: “The Administration is working expeditiously to effectuate these changes, which will be implemented via steps taken and regulatory changes made by relevant Departments and Agencies in short order.”

This formulation seems to indicate that the administration will not give the opponents of change time to move to prevent them. Even the very tone of a statement issued by Senator Menéndez’s office appears to be one of resignation.

The fact that Biden, after long months of procrastination, has finally decided to make these changes, albeit timidly, six months before the November elections, can be read in many ways. But one that is clear is that, even if they ultimately lose their respective electoral races, Democratic candidates in districts with large Cuban-American voters in South Florida will now be able to defend a policy that is not that of Trump, but that of the president of their party. For now, some “Cuban-Americans for Biden” are already proclaiming that the president has just won back their votes.

Another interesting consequence is the one that has to do with two measures that favor the private sector of the Cuban economy. This is very clear in the decision to reinstate people-to-people visits that have been one of the driving forces behind the hospitality industry.

But there is also a whole paragraph that aims to facilitate payments and financial movements for Cuban entrepreneurs. Although it is not very clear how this will materialize given the comprehensive nature of the coercive measures specifically in the financial field.

The reestablishment of group trips, even within the limited existing categories, will stimulate U.S. operators to lobby in favor of its expansion, for example in the cruise area​.

With this step, officials at the Department of State, Commerce, and the Treasury who supported Obama’s policy will have one more reason to confront and neutralize not only Menéndez, but also Rubio and the Cuban-American Republican congresspeople from the south of Florida, because they know that the White House decision is to return to the path that was opened in 2014-2016.

Moreover, the large group of congresspeople, mostly Democrats but also Republicans, who have signed letters supporting a return to Obama’s policy, will have reasons to revive their initiatives in favor of lifting the sanctions.

The vicissitudes of the irrational and vindictive U.S. policy towards Cuba have accustomed Cubans to expect very little from Washington.

This step does not change that perception. It can be both the timid beginning of a possible thaw or more of the same. But let’s face it, it is what it is and that’s it. Therefore, it is more positive to see it as an opportunity, without illusions.

We Cubans from here and there, supporters or not of the government, would be doing ourselves a poor favor if we did not take advantage of this new opportunity so that, without giving up our recognized spirit of resilience, we would seek a way to get things back on track as it was until the beginning of 2017.