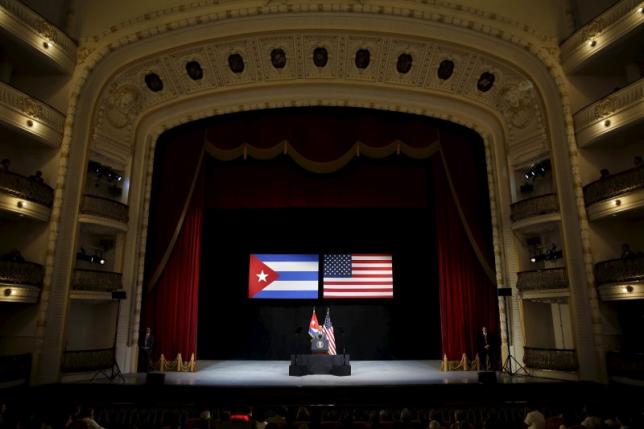 HAVANA, May (Reuters) 17th Cuba and the United States aim to reach new agreements on cooperation in law enforcement, health and agriculture over the coming months, a senior Cuban official said on Monday, as part of the former Cold War foes’ drive to normalize ties.

The Communist-ruled island and its northern neighbor reestablished diplomatic relations a year ago after decades of hostility and have since signed deals on the environment, postal services and direct flights.

A bilateral commission met on Monday in Havana to establish a roadmap for talks over the rest of this year, which would include more high-ranking official visits, said Josefina Vidal, head of the Cuban delegation.

“The agenda is quite ambitious,” Vidal told a news conference, adding that talks about intellectual property rights were also in the cards.

The two sides had discussed holding dialogues on human rights and claims, the U.S. embassy in Cuba said in a statement.

They already outlined their respective claims late last year, with the U.S. seeking upwards of $10 billion in compensation for nationalized properties and Cuba demanding at least $121 billion in reparations for the U.S. trade embargo and other acts it described as aggression.

“The United States looks forward to holding these meetings in the near future,” the embassy said. “Tomorrow (we) will discuss specific steps related to bilateral security during the law enforcement dialogue.”

Vidal, who is the Cuban Foreign Ministry’s chief of U.S. affairs, said the island was hopeful that whomever became next the U.S. president would continue to deepen the detente. The United States will hold a general election on Nov.8.

“When you look at the polls, the majority of the American population and the Cuban American community are in favor of the normalization of relations,” she said. “So I expect their opinion will be taken into account.”