HAVANA, Mar 6 (PL) Cuban President Miguel Díaz-Canel said today that the country is strengthening health control and epidemiological surveillance of the Covid-19 coronavirus.Diaz-Canel published information on Twitter from Cubadebate about the press conference of the Public Health Ministry’s officials (Minsap), where they updated the issue.

The national director of Minsap Epidemiology, Francisco Durán, said that samples of patients suspected of the disease coming from countries with high transmission such as China and Italy were tested.

However, added the official, the diagnosis is negative.

Carmelo Trujillo, head of the International Health Control Department of the same ministry, said that epidemiological surveillance measures were reinforced at the country’s ports, airports and international marinas.

In turn, National Director of the Health Surveillance System and the Center for Ministerial Management, Lorenzo Somarriba, reiterated that as of March 1, 89,068 cases had been confirmed and 3,046 deaths had been reported worldwide.

In Latin America and the Caribbean, cases have been reported in Canada, the United States, Mexico, Ecuador, Brazil and the Dominican Republic, he said.

Duran reiterated that in order to protect themselves it is necessary to wash their hands for 20 seconds, don’t touch the entry points of the virus, such as the mouth, eyes and nose, cover themselves when coughing or sneezing with the angle of their elbow, and don’t stay near people with symptoms of the virus. 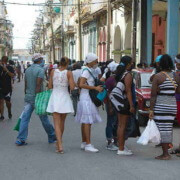 Carmen Herrera, the 104-year-old Cuban painter, will have a mural on the streets...