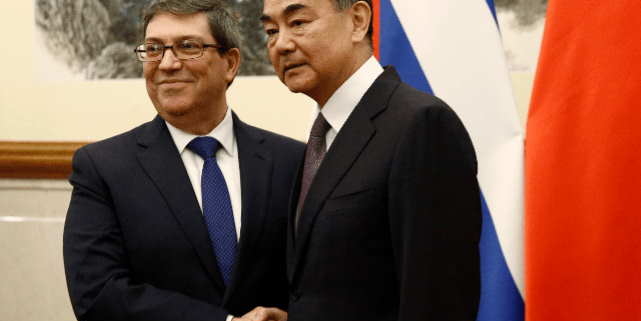 China and Cuba signed educational agreements Monday in which the Chinese Communist Party agreed to ship textbooks, educational equipment, and Mandarin language teachers to Cuba to teach in Cuban schools.

“Promoting the teaching of the language of the Asian giant to select basic high schools is… among the actions [taken in the educational exchange], which the ministry of that country [China] will provide professors, textbooks, equipment, and necessary materials for,” the Cuban News Agency, a communist-run outlet, announced on Monday.

The agreement will last for at least two years and includes other, less-specific efforts to exchange academic materials and skills. It also includes at least 200 scholarships that China will distribute to Cuban students.

The Cuban regime did not announce an analogous program of Cuban teachers traveling to China to teach Spanish.

Mandarin is the Chinese language spoken in Beijing and much of northern China. China is home to a variety of languages, including Cantonese – the language most commonly spoken in Hong Kong and southern China – and languages belonging to China’s ethnic minorities such as Uyghur and Kyrgyz.

Communist dictator Xi Jinping has launched a campaign to eradicate other languages and impose Mandarin throughout the nation, often with the use of force, particularly in Uyghur-populated western China.

Xi is also promoting efforts to force locals to speak Mandarin in nations it is attempting to colonize through its Belt and Road Initiative (BRI), a global infrastructure project with which China claims it is attempting to link Beijing to western Europe. However, the BRI has offered predatory loans far beyond the scope of the “ancient Silk Road,” particularly in Africa and Latin America.

The government of Uganda began imposing Mandarin language classes in its schools nearly a year ago.

Cuban second-in-command, “President” Miguel Díaz-Canel, agreed to bring Belt and Road to Cuba during a visit to Beijing in December 2018, despite the fact that Cuba was not part of the known world during the time of the ancient Silk Road. Díaz-Canel traveled to Beijing at the behest of dictator Raúl Castro and received a warm welcome from Xi Jinping.

“As socialist countries, China and Cuba are good friends, comrades, and brothers,” he said at the time. “Chinese people will never forget that Cuba, led by Comrade Fidel Castro, was the first nation in the western hemisphere to forge diplomatic ties with China 58 years ago.”

Since that visit, Cuba took out a hefty loan to import Chinese workers to build a modern railway connecting the east and west regional capitals of the island, Havana and Santiago de Cuba (Havana is also the national capital). The railway made its debut in July, featuring the first new rail cars used on the island in 44 years. The round trip is estimated to take 14 hours and feature “luxury” accommodations.

Neither government overtly identified the railway as a BRI project.

Cuba’s government has experienced a collapse in its revenue, which has mostly used in the 60 years since the Cuban Revolution to enrich the Castro family. Modern Cuba relied on Venezuela’s vast oil riches to stay afloat as it is a communist economy that produces nothing of value. While Venezuela’s turn towards socialism is what granted Cuba access to its natural resources, it also collapsed the Venezuelan economy, creating mass shortages of basic goods in Cuba.

The Castro regime announced in January that it would invest heavily in a marketing campaign to attract more Chinese tourists. The first step in doing so was allowing China to overrun Cuban academic institutions through its “Confucius Institutes,” which Beijing uses to enforce communist dogma in host countries. Professors began teaching Mandarin in Havana in 2018 to help Cuban college graduates find jobs in tourism, where they could give Chinese visitors a warmer welcome.

The newly announced Mandarin program will presumably also factor into the tourism industry, attracting service workers who do not go to college.

Havana also announced it would open two new Chinese restaurants in 2019. The dire shortages of eggs, milk, chicken, and other basic food goods suffered by residents of Havana always manage to avoid affecting the luxury hospitality industry run by the Castro regime in the city.

“Every day we want to insert more Chinese products and technologies in the tourism sector. And currently, in addition to buses and vehicles for rent, we have bought air conditioners for rooms in many hotels,” Michel Bernal, director of the development sector at the Tourism Ministry (Mintur), told the Chinese communist state news agency Xinhua in January. “we are also assessing other goods for the Cuban hotel industry.”

In July, Mintur bought advertisements on the sides of buses in Shanghai, Beijing, and Guangzhou urging Chinese citizens to come to visit “authentic Cuba.”

Brazil for first time votes against U.N. call for end to U.S. embargo on Cu...
Scroll to top