HAVANA, Nov 17 (PL) Cuban President Miguel Diaz-Canel spoke reportedly with the general director of the Kuwaiti Fund for Arab Economic Development, Abdulahawab A. Al Bader,
on bilateral projects and other matters of common interest. The local media reported that at the Saturday meeting Diaz-Canel and Abdulahawab A. Al Bader spoke about cooperation projects for the rehabilitation of hydraulic and networks and sewerage system in several Cuban provinces, including the capital.

They also referred to other economic development programs and policies in the country and highlighted the good state of bilateral relations between Cuba and Kuwait. 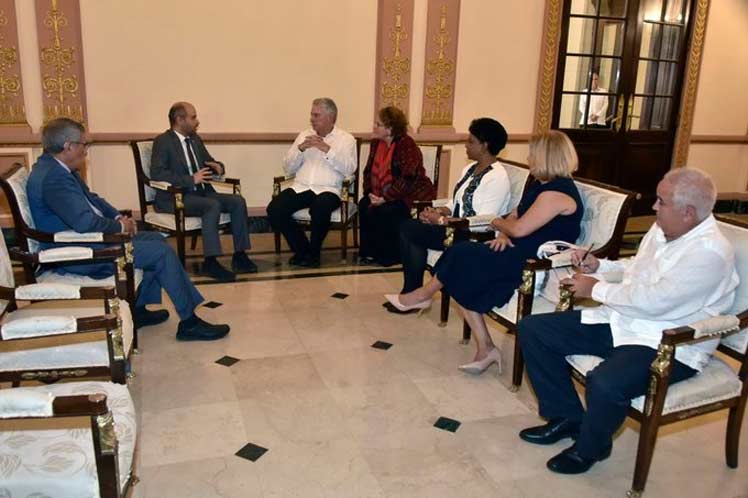 It was known that Abdulahawab A. Al Bader traveled to the island heading a delegation from the Kuwaiti Fund on the occasion of the 500th anniversary of Havana.

Mohammad Fadel Khalaf, Kuwait’s ambassador to Cuba, and Abdullah S. Al Saquer, regional director for America of the, participated in the meeting.

From Cuba were also present the Vice President of the Council of Ministers Ines Maria Chapman, Deputy Foreign Minister Ana Teresita Gonzalez and Emilio Lozada, Director of Bilateral Affairs of the Ministry of Foreign Affairs.

Havana celebrated its 500th anniversary with music, dancing and fireworks