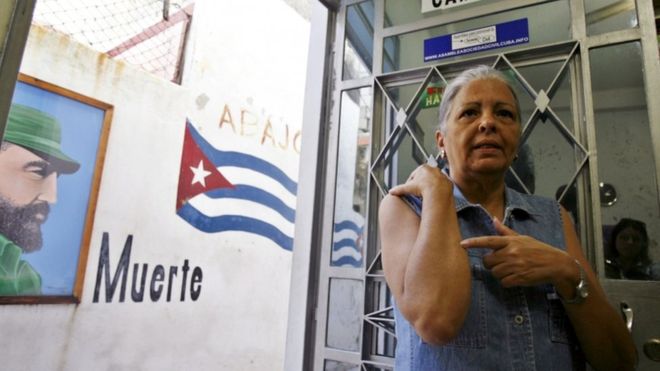 Martha Beatriz Roque is one of the dissidents who has been granted a trip abroad. She says she will go and visit the US to see family

HAVANA, Feb. 25th The Cuban government has eased travel restrictions for some of the country’s best-known dissidents.
Activists said seven members of a group known as the Black Spring were told they would be allowed to make one journey abroad for good behaviour.

One of the seven, Marta Beatriz Roque, said she believed the move was a concession ahead of next month’s visit to Cuba by President Obama.

The US government has been pressing for more freedom for Cuban dissidents.

“It appears to be some kind of gift they want to present to Obama, but in reality it is nothing concrete because when we come back we will return to legal limbo,” said Martha Beatriz Roque.

The decision to grant seven of the most high profile dissidents the right to travel, albeit for a single trip, serves several purposes.

First it gives the Cuban government a recent example of fairer treatment of dissident leaders on the island. Secondly, and perhaps most importantly to the Castro government, the dissidents may choose to stay in the United States, removing them from the debate inside Cuba altogether.

While human rights organisations generally welcome any easing of the restrictions on the group, some of the dissidents themselves have voiced scepticism at the move.

The thorny question of human rights in Cuba will inevitably be back in the spotlight of the world’s media soon during President Obama’s trip. 75 people were arrested in the Spring of 2003 during a crackdown on opposition activists. Most were freed about five years ago on the condition that they moved abroad.

But eleven dissidents refused the terms of the amnesty and have remained in Cuba, though they have be allowed to serve their sentences outside of prison.

President Obama has said his trip to Havana on 21 and 22 March is aimed at pushing the Cuban government to improve conditions for its people.

In Washington, a White House spokesman welcomed the decision to let the dissidents travel outside Cuba.

When the thaw began in Cuba and the US’s relations in December 2014, the Cuban government released 53 people considered by Washington as political prisoners.

But, according to the Cuban Commission for Human Rights and National Reconciliation (an independent human rights organisation considered illegal by the Cuban government), Cuba has resumed detentions.

The Commission says on average more than 700 people were detained temporarily each month in 2015.

“We will continue to support Cuba in everything,” Russia promises