HAVANA, Sep 5  The Russian company Zarubezneft in conjunction with the Cuba Petróleo Union (Cupet) are successfully using horizontal well technology in flow mode for oil extraction, a government source highlighted today. Foreign Trade and Foreign Investment (Mincex), Rodrigo Malmierca, the new technology has a flow of 52 tons per day in Boca de Jaruco, in the western province of Mayabeque.

It is a foreign investment that contributes technology to our economy, said the headline on his Twitter account.

For his part, the general director of Zarubezhneft JSC, Sergey Kudryashov, said in a statement that the Boca de Jaruco project constitutes a strategic element to maintain technological leadership in the industry, which implies the creation and development of innovative approaches for oil production.

This year a new stage of field operations began with the launch of the first horizontal well, the extra viscous oil production processes will be refined in this project and we are focused on achieving even greater results in the future, Kudryashov said.

The project involves new developments and technical solutions from national manufacturers, as well as equipment capable of operating in an aggressive environment and at high temperatures, he added.

At that time, Kudriashov explained that the Boca de Jaruco project was geological exploration, but after two years the company plans to drill 30 wells and in the initial phase the investment will be around 100 million euros. 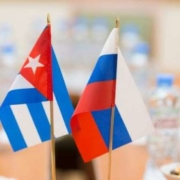