HAVANA, March 5th (UPI) — Cuba is on its way to seeing a growth in annual tourism to the island of at least 5 million visitors this year, officials said Monday.

Tourism minister Manuel Marrero said as of Sunday, Cuba had already seen 1 million visitors — reaching the mark five days sooner than last year. His said his agency will ratify this week a goal of 5 million visitors for this year, which would be an increase of 6.4 percent from 4.7 million in 2018.

Marrero said there are efforts underway to build five-star hotels “to introduce a variety of hotels that will make a difference.”

“We are immersed in a process of digital transformation of the Cuban touristic destination and we are doing so in the framework of a process approved and led by the government,” Granma, the official newspaper of the communist party in Cuba, reported.

About 42 percent of visitors to Cuba return, Marrero said, adding that several companies are working with the government to bring investment to hotels, golf courses and other businesses — with many of the investors coming from Spain.

Granma reported in December Cuba is expecting significant hotel investments and other tourism-related upgrades for the 500-year anniversary of Havana’s founding, in November. Chinese companies are behind some $700 million in hotel financing and other recreational infrastructure. 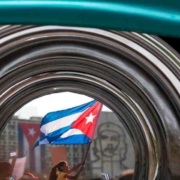