HAVANA, July 8th Havana beautiful, decaying, perfumed by diesel fumes and sweet sea air—is a challenging place for an outsider to come to grips with, even after repeated visits:

Why has someone left the carefully arranged head and feet of a dismembered goat outside a Catholic church? Why are the taxis nicknamed almendrones (literally, “big almonds”)? And, perhaps most puzzlingly, why do Cuban adults eat so much ice cream?

Starting around 10 a.m. and going well into the evening, Havana, especially its Old and Central quarters, is filled with people—an old lady with smooth, nut-brown skin; a young man with an Elvis-meets-Reggaeton hairstyle; a teenaged girl in micro shorts—consuming great quantities of helado with remarkable dedication.

Some eat out on the street, but most spoon up their pint-size sundaes in one of the city’s busy ice cream parlors, gorgeous but weather-beaten, where it’s not unusual to line up for an hour and a half to get in.

Cuban ice cream parlors are curious places. Arlequí­n, a medium-size store on a busy, pedestrianized street in Central Havana, is done up as if a child’s birthday party were about to start, its walls illustrated with huge cartoon characters that seem drawn from some trippy fairy tale.

Yet for all the frivolity of the decor, the mood inside is oddly subdued, as though the liveliness of Havana had been held back at the door. Ice cream shops may be the only places in the city where there’s no music, and the volume of conversation barely rises above the murmur of a library.

The waitresses, dressed in 1950s soda fountain outfits (jaunty little hats, cute monogrammed aprons), are taciturn. I sat at a table with a couple of teenaged boys sharing earbuds, and a jolly-looking group of friends in their 60s, and between them, they barely spoke a word.

It’s a strange contradiction, particularly to a foreigner, but after a few days packed solid with ice cream eating, I started to understand it. As one man told me as we waited in a long, snaking line, “In Cuba, ice cream is social.” It’s just a particular kind of social: people who still subsist on rationed goods, collectively enjoying the rare experience of having as much as they want of something, surrounded by their compatriots, all alone together. 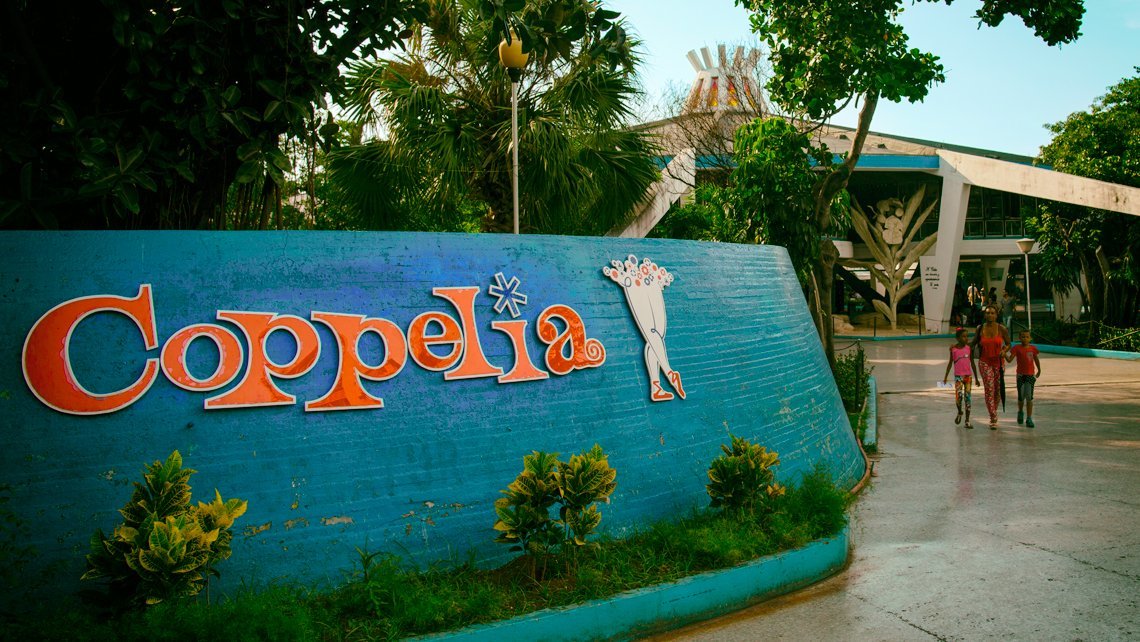 Coppelia is the city’s best-known ice cream parlor. Fidel Castro commissioned it in the early days of the Revolution, and while Havana is full of buildings that evoke faded glory and eroded optimism, Coppelia is a particularly vivid example.

Castro was inspired to create the shop, which bears a strong resemblance to a modernist cathedral, after his first official visits to the United States, where he was turned on to American ice cream and its abundance of flavors.

As with baseball, Castro seems to have been both impressed by Cuba’s imperialist neighbor and determined to surpass it. Built on the site of a former hospital, Coppelia was made to accommodate 1,000 guests at a time and served up 26 different flavors of ice cream in its early years.

Today, beneath its soaring arches and stained glass windows you’re lucky to be able to choose among three, due to the shortages Cuba has been dealing with since various expansions of the American embargo, and the collapse of the Soviet Union. 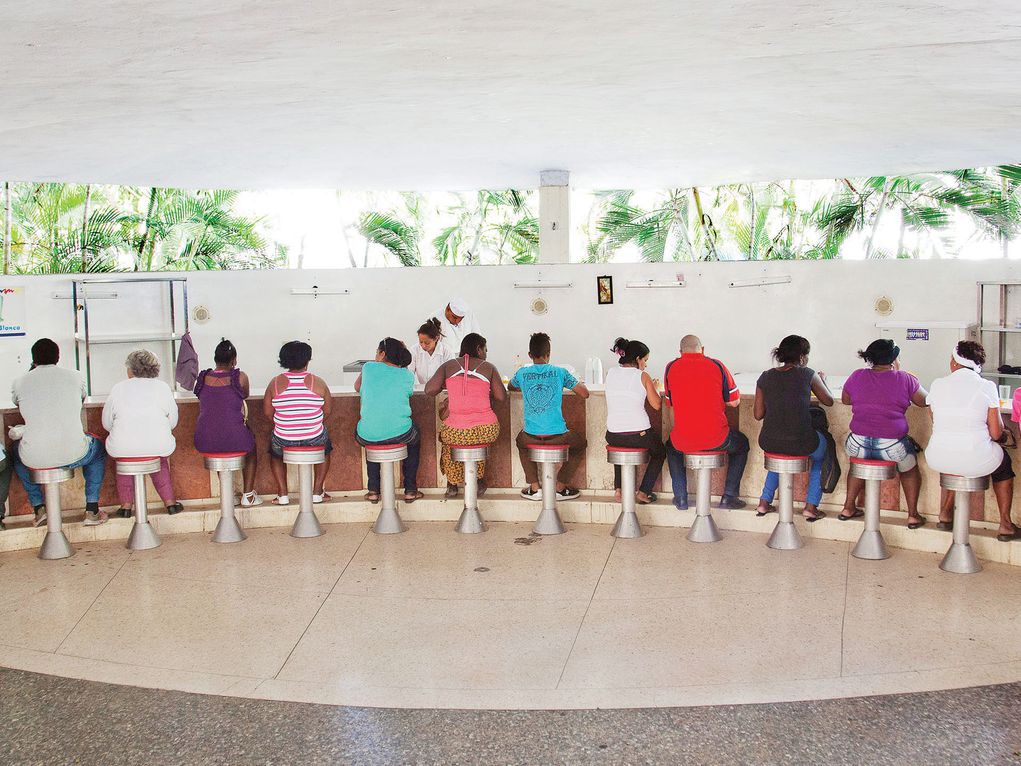 But the number of available flavors doesn’t seem to deter Habaneros. The usual order is an Ensalada—an oval-shaped yellow plastic bowl containing five scoops, perhaps with caramel sauce and crushed cookies on top—and most people order three of them.

These 15 scoops will be polished off in about 15 minutes, after which another Ensalada might be ordered and consumed with equal speed. Many customers bring plastic buckets, ranging in capacity from two to five points, and before leaving order more ice cream to go, squashing as many scoops as possible into their containers.

As I found out when I went to Heladería Ward, a large ice cream parlor with 30-foot ceilings out by the Coliseo de la Ciudad Deportiva sports stadium, people look at you askance if you only order a single Ensalada. Ask for the next size down—tres gracias, three scoops—and your tablemates will assume there’s been a misunderstanding and try to correct your order.

Unlike various staple goods, such as toilet paper and cooking oil, ice cream in Havana is very, very cheap. An Ensalada costs the equivalent of 20 U.S. cents. Unsurprisingly, the quality is not always high: The coconut ice cream at Soda Obispo, a popular store in La Habana Vieja (Old Havana), is delicious, full of strands of fresh fruit; but just down the street is a busy hole-in-the-wall joint whose vanilla tastes worryingly like pink bubblegum.

But deliciousness is only part of the point. During the Special Period (the era of terrible scarcity in Cuba that began with the decline of the Soviet Union), “ice cream was made with water instead of milk, and it still sold well,” said Maria, who has worked behind the counter at Soda Obispo for decades.

In the large back room there I found Wilber, a stocky man in a once-white tank top, who has been making the ice cream there for 15 years. Over the din of his machines, he explained that today his milk—”all full fat”—comes from New Zealand, Mexico, and Uruguay.

“The government buys it from those countries, then sells it to us for an affordable price,” he said. At some level, the Cuban state has apparently decided that a population with limited access to many essentials deserves, at the very least, affordable ice cream.

At the beginning of the Special Period, Cuba lost suppliers of both powdered milk (East Germany, during reunification) and butter (an economically depressed the Soviet Union). Without money to buy these products elsewhere, the government had to decide whether the labor of its small number of cows would go toward the production of butter or milk for ice cream. Ice cream won.

One possible reason for this was offered up to me by a man I met who runs a casa particular where people can rent rooms and where I once stayed, and who also sells pirated DVDs and software in Central Havana. “People like me, with their own businesses, go to comedy clubs in Vedado,” he said, referring to a more upscale neighborhood.

“We’ll pay the entrance fee, have some beers, and hang out there. But people earning a regular salary in national pesos can’t afford that.” For the average Havana resident living on a regular state salary, a few beers in a bar would add up to a week’s wages. An ice cream parlor may be the only place regular people can afford to eat or drink with others.

The best ice cream I ate in Havana came from a tiny store in La Habana Vieja called El Naranjal. It was a modest-size vanilla ice cream sandwich. Acquiring it took about a minute and cost the equivalent of 60 U.S. cents, which would have been affordable to the Cubans walking past me as I left the store.

But outside on the street, passing packed ice cream parlors, I understood why my sandwich’s deliciousness was only part of the Cuban ice cream experience. I finished it alone, then headed back to my room.

Films from 26 Countries Compete in Cuba’s Festival of Gibara