HAVANA, March 6 (EFE) The portrait of a hieratic Che Guevara that Cuban photographer Alberto Díaz ‘Korda’ captured in Havana after the triumph of the Revolution,he spent years unnoticed before becoming an icon. This Thursday the most reproduced image of the world turns six decades old.

On March 5, 1960, Che participated in the funeral of the victims of the ‘La Coubre’ explosion, a ship from Belgium to Havana with weapons and ammunition for the new Government led by Fidel Castro, who considered the event sabotage.

Korda (Havana, 1928 – Paris, 2001) captured there the image of the guerrilla – whose hieratic attributed to the anger contained by human and material losses – to publish it in the now disappeared newspaper “Revolution”, although its editors discarded it in the circulation the next day.

The photo, entitled ‘Heroic Guerrilla’, remained hanging on the wall of Korda: “It was not famous then, in 1964 there was only one copy in the studio,” explains José A. Figueroa, at that time assistant of the portrait’s architect and today one of the most recognized photographers in Cuba.

In fact, it was not until 1967, after the death of the protagonist in Bolivia, that the Italian editor Giangiacomo Feltrinelli acquired the rights to publish ‘El Diario del Che in Bolivia’ and used the image on a poster that sold two million copies in six months. “As the photo became more important, more requested, we always printed it in my laboratory,” says Figueroa, who has been almost as linked to that image as his ex-partner and friend who died 19 years ago.

Something that few know is that Korda, seeing Che stand out from the public during the funeral ceremony, pressed the shutter twice. “He took two frames. Only one was known and the other was never printed because there was the head of a man behind,” explains Figueroa, who keeps an original copy of both images, in which Che’s face expression is almost identical

On the occasion of the 60th anniversary, today the Cuban photographer decided to spread this unknown copy for the first time on the Instagram social network.

Six decades after the famous snapshot, Korda’s ‘Heroic Guerrilla’ and the versions of Jim Fitzpatrick and Andy Warhol still fill university dormitory walls and are used in banners, t-shirts, stickers and even in controversial commercials, such as the giant’s Mercedes Benz in 2012.

In Cuba, it is difficult to walk without bumping into the image, marketed as tourist merchandise and reproduced on a large scale in Revolution Square, where the former US president. Barack Obama insisted on taking a picture with the ‘Heroic Guerrilla’ in the background during his historic visit to Havana in March 2016.

One of the few originals was auctioned in Vienna in 2013 for more than 9,000 euros and in 2016 Korda’s youngest son, Dante sold for 18,000 euros the Leica camera with which the artist took his most iconic image and documented the first years of the Cuban Revolution. 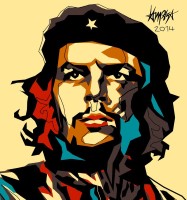