HAVANA, July 20   (WSVN) — The United States and Cuba will mark the end of 54 years of hostilities and the restoration of full diplomatic relations with dual embassy reopenings in Washington, D.C. and Havana, as well as a ceremony in the nation’s capital Monday morning.

A sign designating the building at 2630 16th St. N.W. in Washington, D.C. a “Cuban Interest Section” has been taken down. On Monday, the Cuban flag will be raised on a pole located in the front, and the structure will become the Cuban Embassy. Cuban Foreign Minister Bruno Rodriguez, has traveled from Havana to D.C. will lead the ceremony, which is scheduled to begin at 10:30 a.m.

Speaking in Spanish, Cuban president Raúl Castro said the development is encouraging but it will nevertheless take time. “A new stage will begin, long and complex, on the road towards normalization of relations, which will require the will to find a solution to the problems that have accumulated over more than five decades,” he said.

On Monday, Rodriguez will also hold a joint news conference with Secretary of State John Kerry at the State Department. The Cuban foreign minister is expected to press for the end of the embargo, as well as the return of the Guantánamo Bay Naval Base.

Kerry, on the other hand, is expected to raise concerns about human rights and a free press in Cuba, a sentiment echoed by White House Press Secretary Josh Earnest. “We would like to see the rights of political opponents of the Cuban government inside of Cuba not be thrown in jail because of their political views,” said Earnest. “The second would be to respect the rights of independent journalists in Cuba.”

In Havana, the U.S. Interest Section will become a full-fledged embassy. Chief of the Mission Jeffrey DeLaurentis will see his title upgraded to chargé d’affaires. However, the U.S. flag will not fly over the embassy until Kerry visits Havana later this summer. “I look forward to taking part in the reopening of our United States Embassy and the beginning of a new relationship and new era with the people of Cuba,” said Kerry.

Some, including U.S. Rep. Ileana Ros-Lehtinen, R-Fla., have been opposed to restoring diplomatic relations between both countries, and has been pushing for change on the island first. “They still have violations of human rights. They don’t have a free and independent press, they have no rule of law, no political parties, no free elections,” she said.

Monday morning’s ceremony in D.C. is expected to air in Cuban TV. About 500 guests are expected at the event. 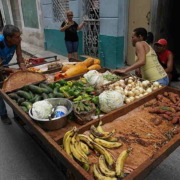 For good and bad, U.S. tourism will change Cuba 35,000 Cuban criminals may return to Cuba
Scroll to top