HAVANA, 9 Dec. (EFE) .- Carlos Acosta, the “black god of Cuban ballet”, returns to his native country as the prodigal son “who never left” with his biographical film Yuli, a story of success and “hope”, directed by the Spanish Icíar Bollaín and now exhibited in Havana as a gift “for Cuba and the Cubans”.

To its premiere at the 40th International Film Festival of Havana attended by more than 5,000 people, who applauded with fury one of its most beloved stars, the first black dancer to become star of the Royal Ballet of London, left from Los Pinos , one of the most humble neighborhoods in Havana.

The success of the Havana premiere of the film, told by Paul Laverty in a script that includes María Rovira’s choreography, seems to fulfill the prophecy of Pedro Acosta, Carlos’s father, when he predicted that one day the country would “put on a red carpet” to the return of his son.

“I think that they have received me very well, my heart has always been in Cuba, when I expressed that idea of ​​returning – between quotes, because I have never left – and founding my company and my school here, my ideas were accepted. with great enthusiasm, “Acosta told Efe today.

Despite being far away, his intention was always to return “to help the arts” and “leave a legacy” in his country, where he still dreams of rescuing the ballet school in the emblematic building of the University of the Arts, in Havana, one of the scenarios of Yuli.

For the actor-turned dancer, who plays himself in the film, the “film is a mirror for all Cubans” and a “reflection on that traumatic past” that was the intense economic crisis of the 1990s, known as Special period.

“It’s not just my story, it’s the story of many like me, but the important thing is to see not only misery, but success, there’s a lot of hope in this story, it’s the triumph over adversities, the proof that working hard you get somewhere, there are many Yuli out there who need that message, “he said.

Yuli is the nickname Carlos Acosta received from his father since childhood, a humble truck driver, descendant of slaves, who intuitively recognizes the enormous talent of his son and forces him to attend ballet, a career that in Cuba enjoys worldwide prestige and It is studied for free.

The veteran Santiago Alfonso, one of the best dancers of contemporary dance in the history of Cuban dance, masterfully interprets the stubborn Pedro, one of the main architects of the success of his son, along with the director of the National School of Ballet, Ramona of Saá, embodied by Laura de la Uz.

The film walks through the recent history of the country to narrate the journey of little Yuli, who had no television, slept in the living room of his house with his father and wanted to be rumbero, and instead becomes one of the largest names of the international ballet.

The screenplay by Briton Paul Laverty, winner of the San Sebastian Film Festival in 2018, is based on the autobiographical book Sin Mira atrás, an intimate tale by Acosta, which has become a bestseller in Europe and whose Cuban edition still awaits its publication in Cuba.

“The story of Carlos is special, a child who did not want to be a dancer and becomes a star of the Royal Ballet is amazing, someone descended from slaves ends up dancing in the heart of London the character of Romeo, the prince of love, Prince Blanco, that’s a kick in the heart of the establishment, “Icíar Bollaín said.

The experienced director came to the co-production between Spain, France, Germany, Cuba and the United Kingdom by her partner, Laverty, who traveled to the island and shared for several weeks the rehearsal sessions at the Academy and the company Acosta Danza, founded in 2016 .

According to Bollaín, this is “the real premiere of the film”, which was already shown in Spain, because it is “a history of Cuba and for Cubans”.

“The best gift we received at the premiere was that room with 5,000 seats breathing with the film, getting excited about the movie, and crying with the movie, and when they left, they told me: it’s very Cuban, and that was very nice,” he insisted. 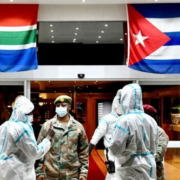 Prince Charles of England could become the first member of the British Royal...
Scroll to top