HAVANA, Nov. 25th On 18 October, Cuba joined the Belt and Road Energy Partnership (BREP) of China’s Belt and Road Initiative (BRI), which seeks to strengthen connectivity in infrastructure and energy investment, and promote cooperation in clean energy and efficiency in participating countries.

Cuba joins Venezuela, Bolivia and Suriname as the only Latin American countries among the partnership’s 31 members, including China.

Cuba’s entry into the BREP comes as the government of Raúl Castro and Miguel Díaz-Canel faces up to the need to renew the country’s ageing energy system, and deals with a considerable decrease in the daily barrels of crude oil sent from Venezuela.

95% of Cuba’s electricity is generated from fossil fuels

But Cuba’s energy system is not only fossil-dependent – it is creaking, too. The long and repeated blackouts experienced by Cubans this summer, caused by failures in their battered electrical system, were one of the main factors for citizens coming out in historic demonstrations across the country on 11 July.

According to a study by two Cuban academics, in order to lower the cost of electricity generation and reduce its emissions of polluting gases, the government aspires to have more than 2,000 megawatts (MW) available capacity from renewable sources by the year 2030, with 755 MW coming from biomass plants, 700 MW from solar parks and 633 MW from wind farms.

This could also help Cuba achieve greater energy independence, given that 53% of its current electricity generation depends on imported sources.

However, project financing will be the main obstacle in an economy that, between January 2020 and September 2021, contracted by 13% (GDP), and has seen a 60% inflation in retail prices – as well as a 6,900% increase in the informal foreign exchange market. Cuba’s goal of generating 24% of its electricity from renewable sources by 2030 is made difficult by its economic circumstances. 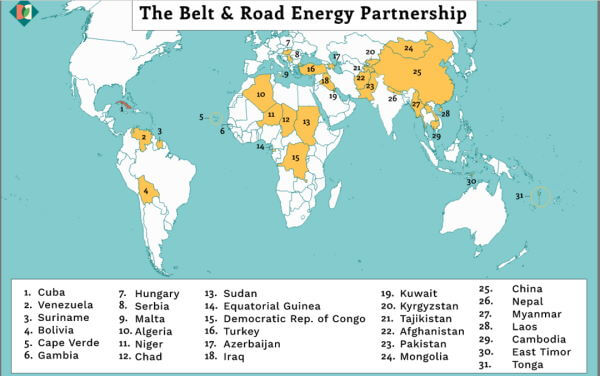 This October, Cuba became the 31st member of the Belt and Road Energy Partnership at a conference held virtually in Qingdao, China. The Caribbean nation hopes cooperation with China can help upgrade its ageing energy system. Graphic: Diálogo Chino

Given its six decades of diplomatic and commercial relations with the Caribbean country, a demonstrated willingness to assist economically and beyond, and the recent incorporation of the island into the BREP, China could help set Cuba on the path to its renewable energy goals.

President Xi Jinping himself has described Cuba as “a good friend, a good comrade, and a good brother.” Even before the BREP was created, China had already invested in biomass plants, solar and wind farms in Cuba. But these have all run up against obstacles.

According to the China-Latin America Finance Database, the first of these investments – a US$60 million loan from the Chinese Export-Import Bank – was approved in May 2015 for the construction of a biomass plant that would use residues from the Jesús Rabí sugarcane mill, in the province of Matanzas.

The project, initially proposed to Cuba by the British company Havana Energy, included the construction of four similar plants but ran into financing problems after one of the main investors withdrew.

The biomass plant was not built, but the project, in general, remained afloat after the British firm agreed in 2017 to transfer a majority stake to Shanghai Electric Group, in exchange for financing, technology and labour for another plant, this time at Ciro Redondo, in the central province of Ciego de Ávila.

Four years later, this biomass plant is connected to the national energy system but runs below capacity due to delays around sugar harvesting, as well as instability, breakdowns and high temperatures in areas of the factory.

The once-powerful Cuban sugar industry is in a deep crisis: of 56 sugar plantations on the island, only 38 participated in the most recent harvest, the result of which was the worst yield in 130 years.

The business group Azcuba, the governing body of the sugar industry on the island, declared to the Cuban parliament last year that the construction of two further biomass plants belonging to the same project has been paralysed due to a lack of financing. There are also no reports to date of new Chinese investments in plants of this type on the island, despite Cuba proposing another 18 as part of its Portfolio of Foreign Investment Opportunities 2021.

The state of the Cuban sugar sector could determine the future of foreign investments in biomass plants, and endanger the 755 MW that the government aspires to generate from them by 2030.

In 2017, Shanghai Electric received another US$60 million from the Chinese Export-Import Bank to rescue a solar photovoltaic (PV) park project, Mariel Solar, that the British company Hive Energy had proposed to the Cuban government, and which was also waiting for financing.

The park only reported its first results in 2020. According to Mariel Solar’s website, its operation has allowed the Cuban government to save more than US$11 million in diesel costs, as of September 2021.

Out of a planned 210 solar parks in Cuba, only 72 facilities have so far been built, with the construction of 12 more currently underway

The park’s official site specifies that, once it has reached its maximum potential, the park could extend these savings to US$20 million a year, even after paying the company for its operations – an amount that represents a third of the Chinese investment.

Despite the success of the Mariel Solar park, a total of only 72 PV parks have been built in Cuba, out of 210 planned by renewables development and investment company EDIFRE, with just 12 projects currently under construction.

Elsewhere, the La Herradura wind farm in the east of the country, built with Chinese technology and labour, is experiencing delays to imports of parts, and will be put into operation with lower capacity than planned, according to local press reports.

According to Cuban government data, of the 506 MW of renewables that they should have in operation at the moment, only 302 MW is currently doing so. Thus, the dependence on finding Chinese investors to provide significant sums to the island is evident.

Will renewables be a sector where China invests further in Cuba? For Luis Carlos Battista, a Cuban lawyer specialising in economy and international business, it should be, but investment is likely to focus on ensuring domestic electricity supply, rather than projects that provide energy to develop local industry.

“That this has an impact on the development of other industries in which to invest later is more for the long term,” Battista continues, adding that, for Chinese investors, the benefits of wind and solar are “much more indirect than when they have created refineries, dams or hydroelectric plants in other Latin American countries.”

However, according to Johannes Werner, the editor of business news site Cuba Standard, finding investment to correspond with Cuba’s priorities may be a challenge. He points out that Chinese companies may be reticent to engage in the country, given their preference – and that of most international businesses – to avoid “unreasonable exposures and risks in the pursuit of profit”.

One month after Cuba’s official entry into the BREP, there are as yet no reports of future projects that might help to resolve the country’s energy difficulties.

Battista believes that this is because of Cuba’s “inability to pay credit” and to the island having “little potential to become a significant socio-economic partner” due to its current economic policies. Such circumstances leave Cuba with little leverage in negotiating investment.

Werner, for his part, does not forecast any dramatic short-term changes. “I do not believe that this situation will change with the Cuban membership of the Belt and Road Energy Partnership,” he concludes.