HAVANA, June 12th (IPSCuba) Twenty years ago, Cuba decided to suspend national production of chicken for consumption because it was apparently a lot cheaper and easier to import than produce it locally. This happened despite economists voicing their disagreement with the decision.

According to a press statement from Alberto Rodriguez, the director of the Production Department in the Livestock Business Group’s Poultry Branch, every province has experience because, in the 1980s, some 120,000 tons of chicken were being produced every year.

Later, the country became completely dependent on chicken imports from the US [food products being exempt from the embargo], and then also on imports from Brazil, Argentina and other markets. [A policy that proves how precarious food security is, and the same thing happens with rice and other basic items.]

Then the pandemic came…

Amidst the current pandemic, lines to buy chicken and other basic items expose people to Covid-19, but producer Sandra Leyva is rearing poultry in the capital’s outskirts.

At her farm, El Futuro, in the Boyeros municipality, Leyva is taking part in a trial to fatten chickens in rustic conditions, so as to then disseminate learning from this experience and once again produce 120,000 tons of this meat locally again, as the country did over 20 years ago.

Working with her family, and with a professional background as a teacher, this Guantanamo native became a cooperative member 15 years ago and revolutionized the 19-hectare farm, where she also plants different crops and has large livestock animals, rabbits and pigs.

Cuba hasn’t been producing poultry meat on a large-scale since the 1980s, and it only produces 9500 tons of chicken meat, from discarded egg-laying hens. 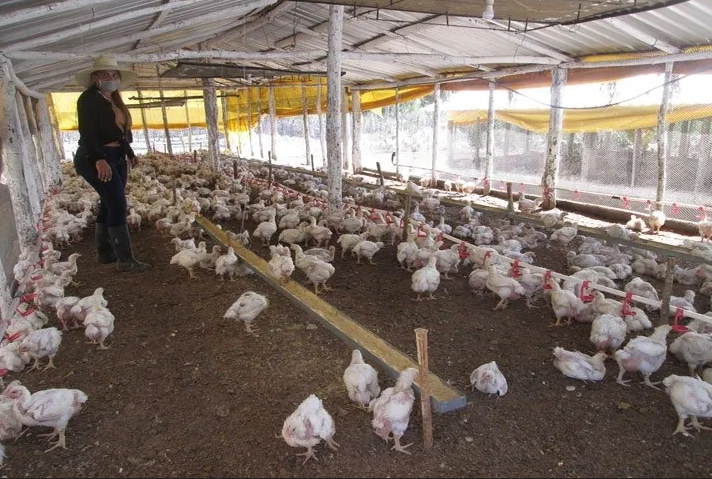 Leyva was one of the two farmers chosen in 2019 to take part in poultry rearing trial in Havana.

“I was given 1500 chickens and we exceeded the planned meat target. So, we were given another 4000, with the objective of fattening them up and producing a little more than 6600 kilograms in 45 days,” she said, while she checks the homemade broiler sheds, built with advice from the state-led Institute of Poultry Research.

The chicks were brought over from Matanzas when they were just an hour old, they were given food and medicine via an agreement with the National Poultry Business Cluster. As agreed with this entity, the chicken meat was sent to the Mariel Special Development Zone.

Leyva explained that poultry rearing has specific requirements: the size and spatial orientation of the broiler sheds, health regulations, management of broiler birds, to name a few.

According to her, “you can rear poultry birds in these conditions. It isn’t a matter of feeding them three times a day and that’s it. You have to be attentive, wake them up all the time, make sure that there is silence because the way they fatten up can cause them to have a heart attack. Here, the death rate was minimal.”

According to Julio Cesar Lopez, president of the Credit and Services Cooperative, “the farmer, alongside her family, has achieved great results in rearing these chickens, which is something we really need to replace imports.”

Taking full advantage of the land

Full of life and unstoppable, Leyva doesn’t settle for just this. She has projects to increase rabbit production, to develop a pig breeding process using highly fertile sows and to also increase her herd of horses.

“On this rocky hill, we have a project of 10,000 chickens, 8000 poultry and 2000 rustic, the first of which are sent to Mariel, and the latter, to contribute to Boyeros’ local market, as part of the municipal supply program,” she explained.

All of this, without putting anything else on the backburner. “Last year, the pork production target was 1.9 tons and we delivered 2.6; the large livestock target was 1 ton, and we produced 2.5, and we also exceeded the small livestock target,” she gave as an example.

During the pandemic, the farm’s team has joined efforts to produce more food for the local population.

“The country needs our support and here we are, contributing as we should. I set myself higher expectations because the earth gives you what you can bring out of her, and that’s why I have support from local authorities,” the farmer said.

The Caribbean island is going through a tough economic situation because of still pending reforms of its centralized and inefficient system, and tougher US sanctions, exacerbated now by the economic impact of COVID-19.

Norberto Espinosa, president of the State’s Livestock Business Group, told local press that “it’s paramount that chicken meat and poultry by-product imports be replaced, which are valued at over 300 million USD. Will the right technology we can produce it here in Cuba.”

The 2019-2020 Portfolio of Foreign investment opportunities included a project, that can be reproduced in another nine provinces, to produce 10,000 tons of poultry meat. Negotiations with foreign businesses were interrupted by the COVID-19 global pandemic.

The University of Havana among the best in the world