in the 41st International Festival of New Latin American Cinema, told Prensa Latina he is eager to return to Cuba to present his other films.

With the tagline ‘Rebel. Hero. Hustler. God’ Kapadia’s latest documentary was screened for the first time in Cuba last night at Havana’s Yara cinema, as part of the much-anticipated ‘Galas’ section of the Festival.

Kapadia noted that he was excited to see how Cuban’s reacted to the documentary, as while Maradona lived in Cuba for five years, the film focuses on a lesser-known period of his younger years playing with Napoli, which included the 1986 World Cup in which he led Argentina to victory.

Asked by PL why he chose to make a film about Maradona, Kapadia noted that as a Londoner, he was a big football fan, and grew up watching him play. “With Maradona, he’s fascinating because he’s the best footballer, but it’s also the way he lived. He played the way he lived, which is he’s a street guy who plays football; if I have to use my hand, I use my hand, I can be better than you, but I can also be smarter than you.” 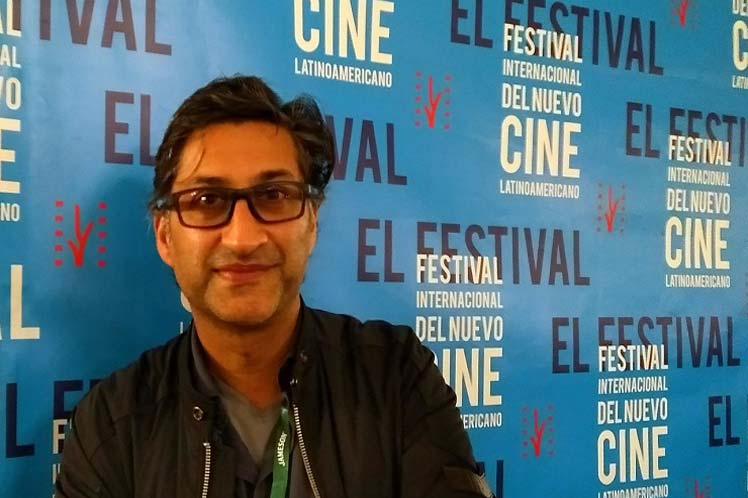 After his success with ‘Senna’ (2010), based on Brazilian racing driver Ayrton Senna, which won the BAFTA Award for Best Documentary, the BAFTA Award for Best Editing and the World Cinema Audience Award Documentary at the Sundance Film Festival 2011; and Oscar and Grammy Award-winning ‘Amy’ (2015), based on singer/songwriter Amy Winehouse, which became the highest-grossing documentary of all-time in the United Kingdom, Kapadia explained that he saw this as the last of a “trilogy of three films about amazing people,” who he was attracted to due to their charisma, or “light and shade.”

“Often it’s because they are people who are not universally loved, I’m more interested in those characters. People who are brilliant and who everybody loves for me are a bit boring,” he stressed.

Explaining his work process, which sees him in a role of “part-film director, part-journalist, part-detective,” and even at times, “part-therapist,” Kapadia noted, “My interest is the journey. How did they become that person, what happened, what was the big turning point to their life and how can I show that to you in a new way.”

To do this, Kapadia works with a small, but very tightly-knit team, seeking out archived and never-before-seen footage, undertaking extensive research, and conducting interviews, “to find a way to have the characters tell their story.”

The British filmmaker stressed that a large part of his work focuses on establishing a relationship of trust with interviewees, in order to get them to reveal aspects of the subject’s life, noting “My hope is to try to tell you something you don’t know.”

This is a long process, with each in this trilogy of documentaries have taken three to five years to complete. Kapadia remarked that such a process means devoting a large part of your life and even your emotions to the personality portrayed, “It’s like falling in love, if you’re lucky.”

He revealed that in the case of this film on Maradona, he spoke with the man himself, who helped establish contacts with his family, and an agreement was made on what footage could be used, as well as three 3-hour long interviews in Maradona’s home at the time in Dubai.

He explained that as Maradona has had such a long, complicated, and exciting life, it was “very difficult to make one film,” which is why the documentary focuses on “one section which we felt people knew the least,” and where new footage could be shown.

“I like characters who are fighters, who are somehow maybe outside of the establishment, who are fighting the system,” the director stressed. With this new take on ‘Diego Maradona’ Kapadia offers audiences precisely that.

Aerogaviota now has flights from Camaguey to Kingston
Scroll to top