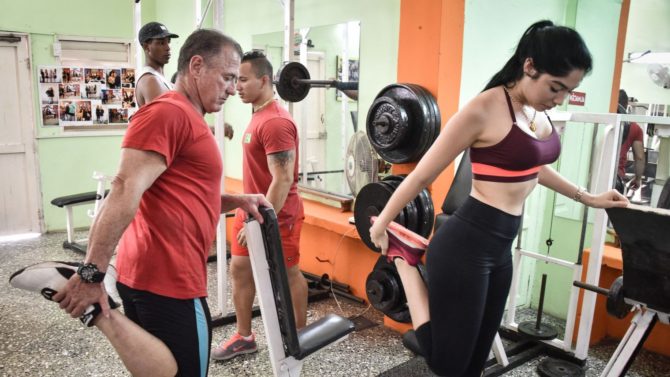 HAVANA, may 24th (AFP) Inside Armando Yera’s gym, toned Cubans in tight spandex are pumping iron in front of mirrored walls and pedaling furiously on stationary bikes, a scene that looks more Miami than Havana.

Yera is one of Cuba’s first competitive bodybuilders and part of its budding class of entrepreneurs. Both activities were long frowned on by the communist regime but are slowly gaining space on a changing island.

Visitors to Yera’s two-story establishment, Mandy’s Gym, in central Havana, are greeted by a brightly colored sign that says: “This will increase your opportunity to be a success.”

In the entryway, there are before-and-after photos of clients whose sagging bodies Yera has helped turn into chiseled statues. Those changes are just about as gradual, painstaking and yet transformative as the ones taking place in Cuba itself, as the island opens up to the world.

The bodybuilding craze started to grow after President Raul Castro launched tentative free-market reforms when he took over in 2008. Last year he reestablished Cuba’s diplomatic relations with its old Cold War enemy, the United States-a bodybuilding haven.
Sian Chiong, a 21-year-old pop singer, is a regular at Mandy’s Gym, and gives it credit for his success with the teenage girls who swoon for him and his boy band, Angeles.

Musicians in today’s Cuba have to please a public that “has become a consumer of image as well as music,” said the muscular, immaculately coiffed young star. It’s a thought that could make Che Guevara turn over in his grave. The late revolutionary dreamed of a Cuba of “new men” who would toss aside individualism and materialistic cares to be selfless communist citizens.

The regime disdained the image-conscious culture of places like Yera’s gym, which it derided as “bourgeois.”But like many things in Cuba, that is slowly starting to change. “The trend of wanting to look good arrived here a little late, because they never let you see the reality of what working out in a gym is all about,” said Yera. He started bodybuilding when he was 18 and retired from competitions in 2008, but still has bulging muscles at age 56.

Suspicious muscles
For years, the regime was suspicious of bodybuilders like Yera. His sport was seen as narcissistic and steroid-fueled, he said. A former customs official, he got into bodybuilding back when the only way to do it was with rudimentary equipment and a protein-rich diet-not an easy formula to follow in cash-strapped Cuba.

He is a four-time national champion, but his titles are not recognized by the state, which oversees all formal sport in Cuba and only grudgingly allowed privately organized bodybuilding contests. “A lot of times they would try to pressure theater management not to hold tournaments,” he said.

But working out at the gym is increasingly becoming not just acceptable, but trendy. Yera had 20 clients when he started his business 16 years ago. Now he has quadrupled that number. Most of his clients pay $30 a month to be members-more than the average monthly salary on the island.

Ironically, he owes much of his success to state TV, which invited him to speak about health on one of its programs. He brought along a woman he helped to “transform” her body, plus his before-and-after pictures.

‘Infected by the world’
After that, famous Cubans started showing up. “I train most of the TV show hosts. They feel pressure to be in shape,” Yera said. And state TV has continued to invite him back to speak about health. Despite its much-vaunted state health care system, Cuba is not immune to the international obesity epidemic: nearly 45 percent of its 11 million people are overweight or obese.

But gyms tend to draw mostly healthy young people looking to meet a set “standard” of beauty, said Dayron Delgado, a 30-year-old bodybuilder who works with Yera. Delgado compensates for the lack of state funding for his sport by working as a personal trainer.

“People are more worried about going to the gym for aesthetic reasons than for their health,” he said. Pop idol Chiong agreed. “Cuba has been infected by the way the whole world thinks,” he said, on the way back from working out his abs.

Even if “that’s hard for the higher-ups” to accept, he added.