HAVANA, May 5 (DDC) No one believes them when they arrive in the neighborhoods offering haircuts, laying extensions, dreadlocks and eyebrows; all free. Roberto Álvarez (aka El Niño) announces it through the microphone and finally someone decides to sit down so they can do what he needs.

At the end, he asks: “Is this really free?” And he’s right to doubt, there is a price … take a book home. If you read it, better. Are you in need of models to practice or a group of crazy people? They should be to work for free in low-income neighborhoods. However, this is what the members of the Barbers Street project do, young people who started in the barber shop empirically and have overcome with talent and effort. 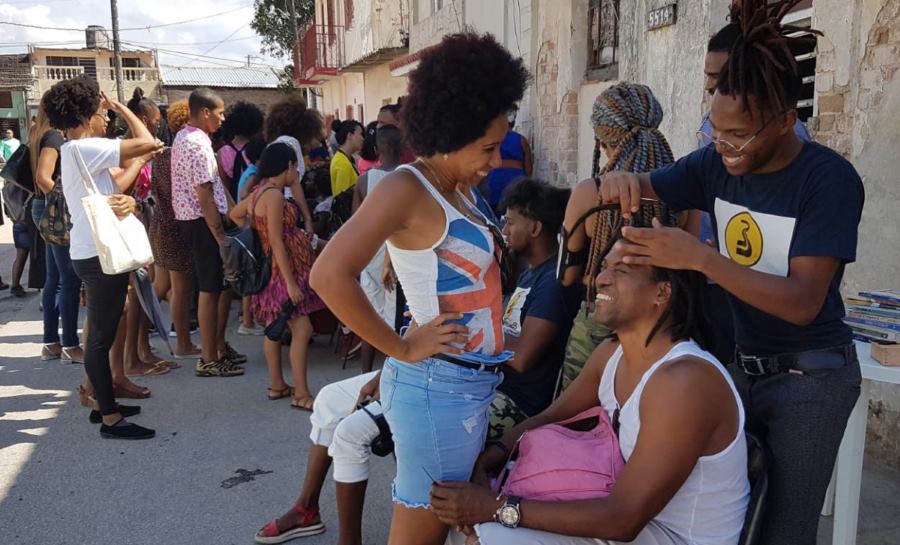 Barbers Street, a tool of change for disadvantaged communities

Although they promote Afro aesthetics and reject descriptions like “bad hair”, they can do the keratin and iron the hair. They are not simple barbers, but stylists interested in more than making money.

“It is a job that comforts you because you help the community, everything in life is giving to receive and here you are giving”, says Yamir Aleaga Navarro. He is the youngest member of the project, with 25 years of age, nine of them dedicated to barbershop, in which he sees a way of expression: “For me it is a pleasure to please others”, says Ivón Ávila, the only woman in the group and last to join.

He is a specialist in braiding and extensions, and now studies at the School of Cosmetology in Havana. He has only two days to work in a beauty salon and can not always sacrifice them to participate in Barbers Street. “Sometimes we would like to work together in a place where we charge and even help the people who peel free.”

The other members are Omar Álvarez, Daziel Alberto Cruz and Neurys Marrero (DJ Neurys), led by Roberto Álvarez, stylist and rapper, who started this project in 2016 to help eliminate violence in disadvantaged neighborhoods through hip hop and the styling tool.

“At first, he had to do it alone many times, because we did not find time, maybe we did not believe enough , but he did not suspend it, “recalls his brother Omar. “When there is a rap concert, only those who have to do with it go, but when we do this, all audiences are mixed,” he explains. For Yamir, Barbers Street is a way to fight against negative stereotypes and a platform for young exponents of Cuban hip hop.

The project aims to summon rappers, break dancers and graffiti artists, so that all the elements of hip hop are represented. “We want to take a message of non-violence, we go to neighborhoods where they say that people are beautiful and we give them the message of getting a We can not help them economically, but we give them a focus and we bring healthy music, “explains Daziel, who has not missed a single event since his incorporation.

“That day is sacred.” Daziel lives off masonry, plumbing and electricity; He learned the barbershop watching his cousins ​​Roberto and Omar. “I was a very problematic guy, I practiced combat sports, thanks to hip hop I am here, without a criminal record”, confesses for his part Neurys. For this DJ, who has worked with important rappers inside and outside of Cuba, Barbers Street is your most important project.

“He is the only one with all the qualities so that hip hop can be a tool of change in Cuba, as I saw in Colombia, we do not have that violence, but we do have government censorship.” If you go to a community to give books and peel for free, that’s not counterrevolution, it’s Barbers Street, hip hop is looking to create awareness and make people better. “DJ Neurys is the only member who is not a barber … yet. “I’m learning, but I’m not in their plane, they’re professionals.”

It’s hard to imagine that such a project could bother anyone. Its members do not represent expenses for any institution, rather they invest from their own pockets to pay for audio and transport. When they leave Havana, although the cultural institutions pay for lodging, meals and return tickets, they must pay for the one way.

The neighbors of the communities usually provide them with chairs, plugs to connect their electric extensions, water. “You have to see, when we go to intricate places, how people thank us for the work,” says Ivón. Daziel a woman gave him a cushion to accommodate those who have problems in the neck, while he pulls out their eyebrows. The municipal directorates of Culture have also been receptive to the project. They have given them the authorization and the space to carry it out.

However, in August 2018, the Police prohibited Barbers Street from being made in Cerro. Yamir says that there was a situation on the road and the police did not let the event take place. “They thought it could lend itself to something counterrevolutionary, an inflated balloon.” But it was done, not on the hill, but near the Fish Park, by the Casino Deportivo.

The first Barbers Street was held in Candelaria, Artemisa, where Roberto is , Omar and Ivón. Afterwards, he has arrived in Casablanca, the Cerro, Pogolotti. They went to the Regla municipality after the tornado. Outside of Havana, they have gone to provinces such as Matanzas and Camagüey.

They hope to go to the Rap Festival of Santiago de Cuba and to the Romerías de Holguín. In addition to the permanent members, Barbers Street invites other stylists to their activities. The project now faces a new challenge: the absence of El Niño. Roberto Álvarez is out of Cuba. The other members do not know when he will return, but promise to continue. They assure that, although Roberto is not physically, “there is his energy and he keeps up with everything”.
First published in Diario de Cuba

With Venezuela standoff unresolved, Trudeau reaches out to Cuba